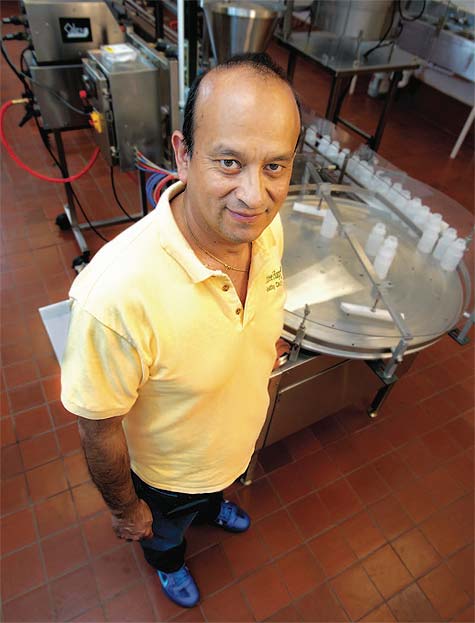 Diaz doesn’t know it, but I’m not a yogurt person. Nevertheless, I dutifully sample some strawberry. Before I can stop myself, a reflexive “ummm” escapes my lips. Diaz sits back in his chair and smiles. “You see? This is what happens.”

A New Beginning for Edgar Diaz

“You know the nicest challenge for me?” says Edgar Diaz at his factory in northwest Dallas. “Convincing someone to try my yogurt. They say, ‘I’m not a yogurt person.’” But he says when he can coax them to try it, they invariably slurp down the whole sample. “Then their tongue goes into the container, and I say, ‘Thank you for not being a yogurt person!’”

His deep brown eyes twinkle. “When you buy something like our yogurt,” he says, “you need to enjoy.” “Our yogurt” is Three Happy Cows Drinkable Yogurt made from certified organic milk from County Line Farms near the Panhandle hamlet of Earth, Texas. Both are young ventures with close ties.

Diaz doesn’t know it, but I’m not a yogurt person. Nevertheless, I dutifully sample some strawberry. Before I can stop myself, a reflexive “ummm” escapes my lips. Diaz sits back in his chair and smiles. “You see? This is what happens.”

He pulls out a handful of brand-name yogurt smoothies from the mini-fridge under his desk. He wants to show the difference. He pours them. We taste. It’s no contest. Three Happy Cows is rich, creamy and mouth-filling as opposed to these thin, insipid imposters. Three Happy Cows has no off flavors. No twang. No chalkiness. No fake color. Diaz doesn’t add preservatives or artificial anything. His ingredients are limited to reduced-fat organic milk, fruit, cane sugar and carefully selected probiotic cultures (S.S. Thermophilus and L.D. Bulgaricus).

Don K. Seale, who handles sales and marketing for Three Happy Cows and County Line Farms, pops into the factory to pick up some coolers of yogurt. He met Diaz when both worked at Lucky Layla Farms. “I went in to introduce myself that first day [at Lucky Layla], and we hit it off like that,” says Seale. “He has a very contagious positive energy.” Last year, Seale stepped up to help Diaz get Three Happy Cows started. Part of “sales” means he’s schlepping yogurt to Austin along with County Line milk.

“Twelve years ago, life had only one reason,” Diaz says, recalling life in his native Colombia: “to build a plant and make money.” He was living in the city of Medellin with his wife Diana and young daughter Alejandra and had a thriving business buying and selling farm equipment. Both Edgar and Diana had studied animal husbandry at National University of Colombia, and it was the fulfillment of a long-time dream when they purchased a dairy farm in the rural village of Girardota. By providing jobs and doing good works, the Diazes hoped they were making a difference in the small community. Unfortunately, their enterprise was in the heart of leftist guerrilla country.

“Without the dairy,” wrote Beatriz Terrazas in her gripping 2006 Dallas Morning News profile of Diaz, “poverty might have driven some of the villagers to accept, if not embrace, the guerrilla causes. The militias were used to demanding money, food, services and even children who could be trained as fighters from the village families. Edgar and Diana were chipping away at their power.”

One day in 2001 after months of escalating harassment, Diaz was kidnapped and held for ransom. He was rescued a week later in a police raid, but officials forbade him to return home. He was hustled off to the airport with a one-way ticket to the U.S., where his parents lived.

One month later, with the rebels closing in, Diana and their young daughter, Alejandra, also fled the country. The Diazes lost everything. They found their way to Dallas later that year, and in 2004, Diaz partnered with Gloria Lopez and Todd Moore to open the dairy at Lucky Layla Farms in Garland. One of the products Diaz and Lopez created was Lucky Layla’s drinkable yogurt. From 2007 to 2009, it won three firsts and two seconds at the prestigious American Cheese Society competition.

But after five years, Diaz wanted to go a different direction and began working to dissolve the partnership. “We left two weeks apart,” says Seale. “I left. Edgar left. Ruth and Livia left.”

Ruth Moreno became Diaz’s new office administrator, and Livia Jamarillo joined him as yogurt-maker. Two friends offered to back him, and the Singh family, which owns Kaurina’s, initially let him use their facility. (Kaurina’s makes kulfi and an Indian cooking sauce.) That was a year ago. By September, Diaz was looking for a place to build his own factory. He found it – six doors down from Kaurina’s.

The finish-out was completed this past March. “I receive a lot of things from people,” says Diaz. He does his best to pay it forward: “It’s the only way.”

I am curious, though. He made award-winning drinkable yogurt at Lucky Layla. Couldn’t he be accused of taking a proprietary recipe with him?

“The recipe for yogurt is on the books,” he says. “Go to any book, open on yogurt, and you have to do this kind of milk, this kind of [probiotic] culture. How you make it different is how you do it.” He’s talking like a winemaker now.

Everything affects the outcome: the temperature, how long it remains at a certain temperature, when to add the cultures, the fruit, even how to stir in the fruit. And that doesn’t count external factors.

“Our process has to change if the weather changes,” Diaz says. “Every single parameter pushes us to make changes in the process. If my strawberries are too light, I have to add more for color.” This is yogurt as artisanal expression.

From Milk to Yogurt

When the milk arrives – about 60 to 70 gallons every two weeks – it goes into the pasteurizer, where the temperature is raised to 180° to 190° F for 30 minutes to kill any bad bacteria. “We go to 110° and add the probiotic cultures,” says Diaz, “and leave it four to six hours.” The cultures are living organisms and don’t do their business at a steady pace; it’s tricky knowing when to halt the process. In part, Diaz goes by smell to tell him when it’s time to move to the fermentation tank. But if the cultures get out in front of him and the yogurt becomes too acidic, he has to turn it into yogurt cheese and start the yogurt-making process over with fresh milk.

If he’s called it correctly, the yogurt goes into the fermentation (ripening) tank, which lowers the temperature to 38° F. There it remains for 12 hours. If all has gone well, Diaz will add the fruit, which he purees from fresh in a giant kettle nearby. “We add the fruit and mix by hand very slowly,” he says. Mixing too quickly ruins the texture.

From there, the yogurt goes into a funnel on the bottling line, where the bottles are fed onto the 10-foot conveyor one by one. Just after the funnel squirts the exact amount of yogurt into each bottle, a contraption that looks like a popcorn-popper spits out a cap that’s locked down tight at the next station. When the bottles come out at the end, Diaz and his crew put the labels on by hand. “We are very small. We try to grow in the market,” Diaz says. “We dream. We want to build a plant to process 300 gallons [a day] . ”

This is the third time Diaz has scrambled to establish a business from scratch. You might think it’d wear on him, but the harrowing experience in Colombia forever changed his perspective. Although he misses his country, he is grateful for his life and the lives of his wife Diana, daughter Alejandra, who’s now 14, and daughter Michelle, nearly four, who was born in the United States.

“Now, I spend time with my family,” he says. He goes to his daughters’ softball games and swim meets. They accompany him to the farmers market. “I learned so many things when I came to this country. When I sit down here and have so many problems, I ask God, ‘Why did you bring me here when I had everything in my country?’ And then I look at these faces.” He’s pointing to the screensaver photos of his family. “That is the reason everything is happening.”

“The most important thing to Edgar is his family,” says Seale, “and he carries that over into his work because the people who work with him are like his family. He would do anything for his family or his employees.”

Back in August, Diaz trekked to Seattle for the 2010 American Cheese Society competition. He entered his organic blueberry- acai, a special-order made for a customer. “When they got to second place and said ‘Lucky Layla,’ I thought, ‘Oh, OK . Well maybe next year.’ Then they said, ‘First place: Three Happy Cows!’ I was very, very happy. I had tears in my eyes. My first thought was to call my wife. She is so beautiful and so supportive. It’s like being the winner in the World Cup in soccer.”

EDIBLE NATION: AMERICAN TERRIOR
DEEP IN THE HEART: A High-Tech Complex for a New Breed of Farmers