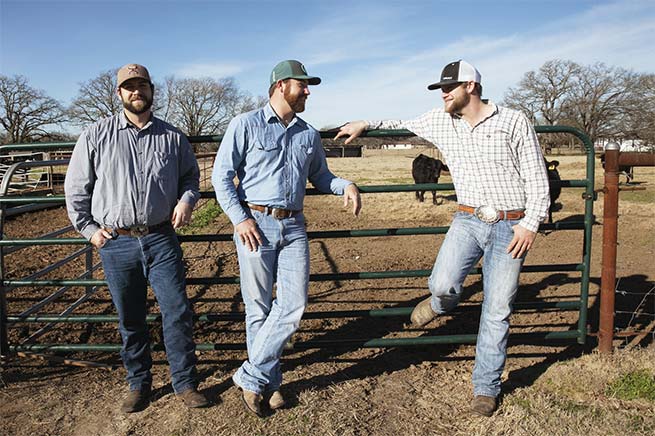 “Every one of these boys grew up
taking care of baby calves, from
when they were 5 or 6 years old.”
— Mike Sams

When Mike and Debbie Sams started making farmstead cheese at Full Quiver Farms from their dairy cow herd in 2002, they had no clue they were on the leading edge of North Texas’ locavore/farm-to-table movement. The cheese was an act of desperation—no more, no less—to save the way of life they cherished for their six children still living at home. Not to mention their “working girls,” the cows.

The Sams’ 65-acre dairy farm outside Kemp, an hour southeast of Dallas, was slowly going broke as prices for wholesale milk plummeted and the cost of feed soared. Each day, the Sams would milk the cows and put the milk in their milk tank for pick-up. Each day, their checks grew smaller.

“We were not making money,” says Mike, a big fella in a John Deere gimme cap, with a salt-and-pepper beard and twinkly, bespectacled eyes. “We were going into debt. That was a hard time.” Mike and I are standing outside the modest building where he still makes the cheese, next to the small milking barn. Beyond the collection of buildings, which also includes the Sams’ Sears and Roebuck mail-order residence, cows graze in one of six pastures while babies and yearlings com-mooon in nearby pens. Knowing his faith’s Protestant work ethic, I suggest to Mike that their initial strategy was probably to work harder. Mike laughs. I am exactly right. And right, too, that it did no good. They were on the verge of selling the farm.

Today, they’re on the verge of selling the farm again, this time for real. But what a difference 15 years makes. Three of their sons— Joshua, Levi and Jesse (at 22, the last child living at home)—are in the process of buying it, with plans to expand. “They have always worked for us,” Mike says. “Now we will work for them.” But responsibility will shift to those younger, stronger shoulders.

Back in the early 2000s, the Sams tried various ways to keep the farm going. “We built storage buildings on the side,” Mike says. “The money we made there was keeping the cows fed. It still wasn’t enough to make it work.”

Their search eventually led them to the writings of Joel Salatin, owner of Polyface Farm in Virginia and sustainable-farming guru. They were drawn to his view that farming can enhance land and animals, rather than deplete them, and one of his strategies was to sell products made on the farm. 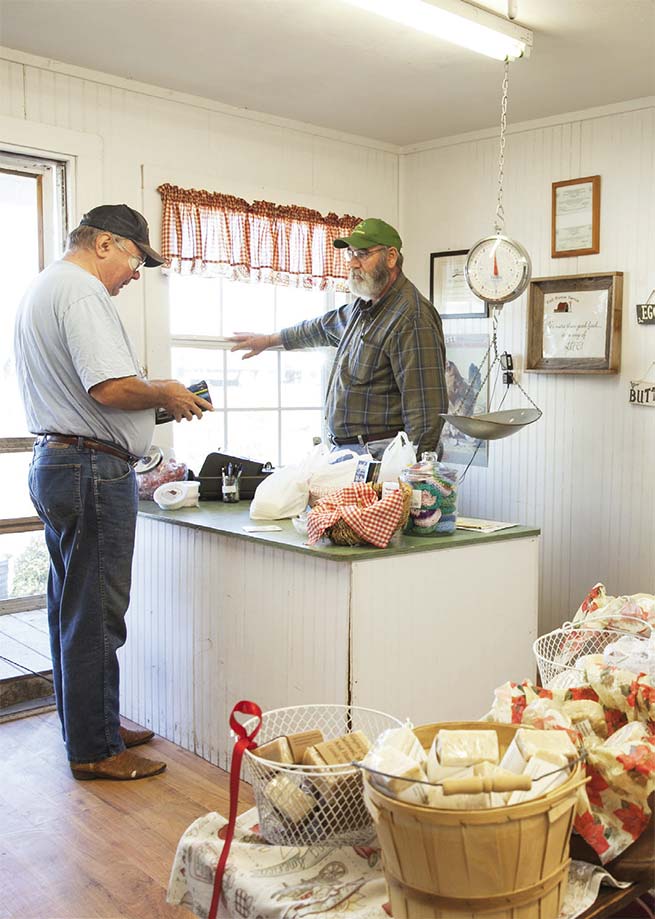 Inside the farm store, Mike rings up a sale.

“We said ‘We have the cow, let’s see if we can do the value-added product,’” Mike says. Cheese-making became the Sams’ Hail Mary pass, a last-ditch effort to claw profitability from the operation.

Sounds simple in hindsight, but it was risky at the time. They were helped by the fact that Debbie already made cheese for the family, plus input from a cadre of experts—from universities to a cheesemaker in Canada. A friend suggested they contact Whole Foods Market, and the buyer liked the mozzarella they presented. It happened so fast; they had no place to make the cheese commercially.

Quickly, they built what the state calls a cheese plant. “We call it the cheese house,” Mike says. On my visit, we step inside to a haze of steam so Mike can stir a batch of clumpy curds and watery whey that’s on its way to becoming cheddar cheese.

Cheddar’s one of several hard cheeses plus mozzarella the Sams make, along with their bedrock cream cheese spreads. Whole Foods and now Central Market sell the spreads and mozzarella. The flavored spreads, like jalapeño and spinach-feta, are so popular that the Sams source the base cream cheese from a commercial supplier. The “girls,” Mike says, can’t keep up with the demand. The cream cheese is still artisan, made by hand, but not farmstead, from milk produced at their farm.

Family members deliver the cheese in person to each store as well as sell at their small, onsite farm market. There, the Sams also have raw milk yogurt and Grade A unpasteurized milk as well as their pastured meats, Debbie’s lacto-fermented vegetables, jams and other goodies. After a long hiatus from farmers markets, the Sams recently began selling at Coppell. 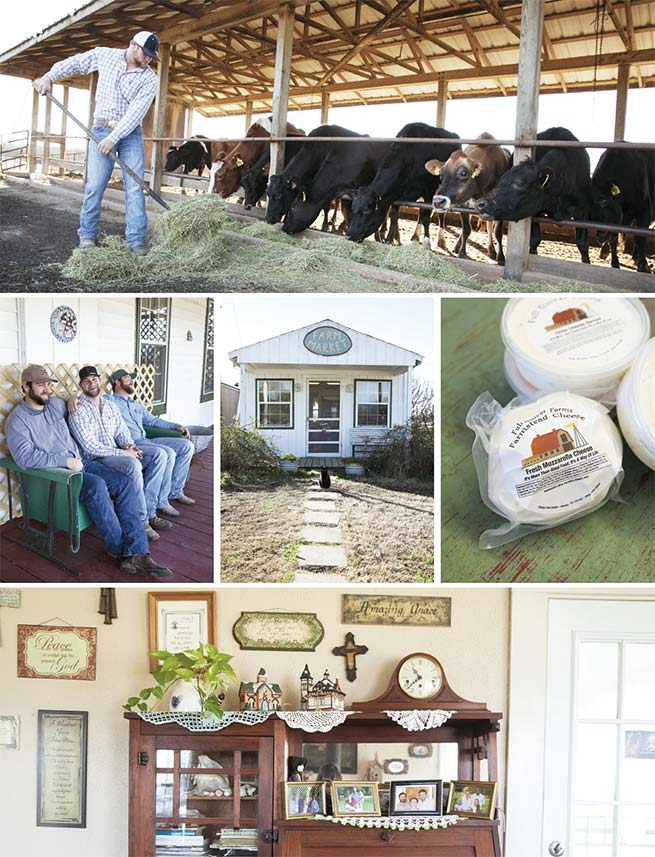 Top: Levi feeds the “working girls” outside the milking barn. Bottom: The Sams, whose faith imbues all aspects of their life, cherish family photos of their clan.

“The boys are taking care of the farming,” Mike says. The same trio that soon will own the farm coax the cows into the milking barn twice a day. Put out alfalfa in the leanest months of winter when there’s little grass. Grow and bale hay as a side business. Fertilize the pastures with manure from the cows. Deliver cheese and work the Coppell market. “Every one of these boys grew up taking care of baby calves, from when they were 5 or 6 years old.” The babies are weaned from their mamas after a few days so the girls can “go back to work.” After that, the babies are hand-fed and kept together for about two years before the heifers are old enough to breed and join the workforce. The steers are sold.

Today their dairy herd is about 40 Holstein-Jersey-cross cows. They raise pastured beef—Angus-Hereford crosses—and Yorkshire-Duroc pigs at two nearby properties. Their pigs get the cast-off whey from cheese-making to produce a milder tasting pork, Mike says, and all their meat is processed at Burgundy Pasture Beef in Grandview, because of its high standards. “Our meats are what we call clean,” he says.

The Sams could be stand-ins for the couple in Grant Woods’ American Gothic, what with their simple farm attire and wire-rimmed glasses. Even the way Debbie parts and pulls back her dark hair echoes the famous painting. The big difference: The Sams beam. Nothing dour about these two.

It may come as a surprise to learn that they were city kids who met in Lubbock and married at age 16 some 47 years ago. They had the first of their nine children before they graduated high school. “I don’t recommend it,” Mike says, also showing obvious satisfaction in the fact that he and Debbie made it work. Debbie, who keeps a garden and chickens as well as handling the farms’ books, is the one who led the couple into farming. Without her, Mike says, he just never would have thought of it.

“We live the way I’ve always wanted to live,” Debbie told Pamela Walker in Growing Good Things to Eat in Texas (Texas A&M University Press, 2009), which includes a profile of Full Quiver Farms. Debbie fell in love with farm life growing up in Garland, where each weekend she got to go to her grandparents’ and aunt’s nearby farms in Farmersville.

“I would go out into the cotton fields and try to help chop weeds, even though I was just little,” she told Walker in Good Things to Eat. “And I’d get hot and sweaty and dirty, and I thought that was the grandest thing! And they had cows, just a few, and milked them by hand, and I would sit in the corner of the stall while one of the grown-ups milked, and then I’d sit by the big milk can and hold it steady and keep the flies off when they poured buckets of milk into it. And by dark, I’d be just filthy dirty, but there was no running water in the house—we drew water from a well and carried it to the house—and we took baths out on the porch in a big metal washtub. And we slept with the windows open. There was no air conditioning. The house was always open during the warm months, and I just loved listening to the crickets and frogs at night. And I thought all of that was living!” 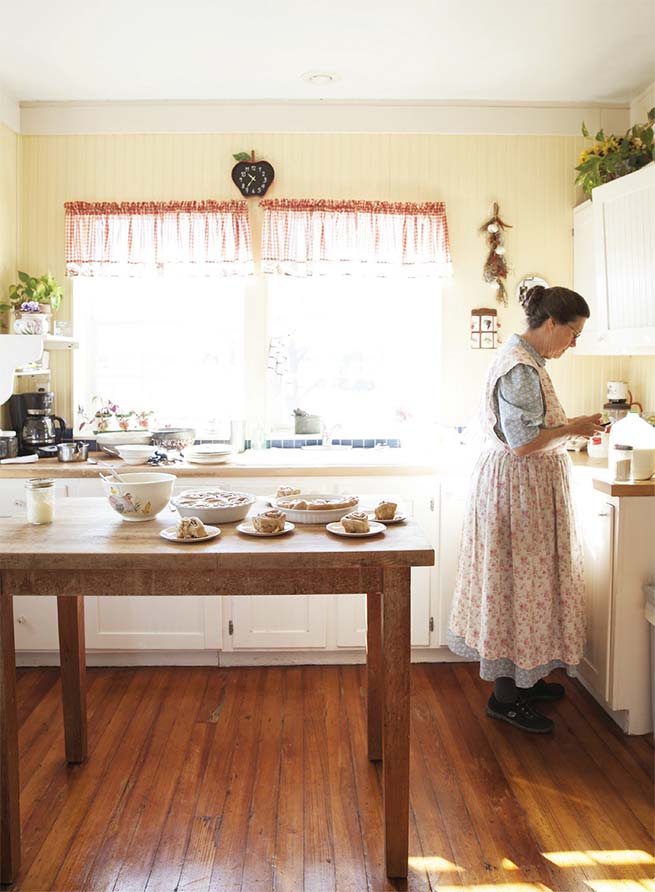 Debbie Sams bakes in the kitchen of her Sears and Roebuck mail-order house.

She still does, taking a break from baking cakes for a faith meeting to offer me a cup of coffee—with fresh cream, of course. The onetime Mennonite couple now worships with the Homestead Heritage faith community in Waco. We sit in the living room, close to the wood-burning stove. “This was a Sears and Roebuck home from ’24 or ‘26,” Debbie says. They bought it in Athens and had it moved to the farm. Out back, blue jeans and work shirts flutter in the breeze on the old-fashioned clothesline. Although the Sams have a dryer, “Debbie loves her clothesline,” Mike says. Back when all the kids were at home—two now live in Pennsylvania, one in Missouri, one in Nebraska and the rest nearby with grandkids aplenty—Debbie did eight loads of laundry a day.

Like Mike, she’s ready to step back to a supporting role at the farm. “What a dream it is,” she says, for her sons to be taking over, noting wisely that the challenge going forward will be for the farm to sustain three families.

“We were at the leading edge,” Mike muses about their beginnings. “That was the time(s). It worked so good for us. We rode that wave and are riding it still.” A wave that’s carrying them right into the second generation.

Simply Spring
Food Waste Gets the Respect It Deserves