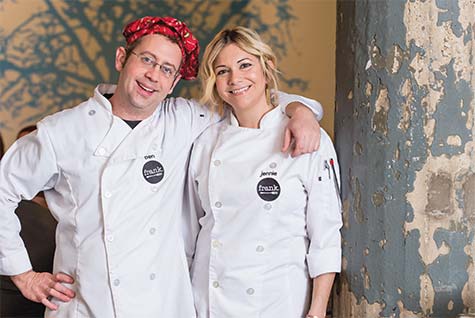 A funny thing happened during the second season of Fox’s MasterChef in 2011. Although neither of the two local chefs won, Ben Starr and Jennie Kelley forged a lasting bond that’s morphed into FRANK underground, one of the most unusual, dynamic and food-obsessed experiences in Dallas. “We met on MasterChef as competitors,” Jennie says, “but we became dear friends.”

A handful of nights each month—if neither is pulled away by competing demands, like Jennie’s other life with the rock band Polyphonic Spree—they conjure up a private, invitation-only dinner from foraged and meticulously sourced ingredients. A group of about twenty lucky guests gather around the long table Ben built with oak flooring scavenged from a 125-year-old farmhouse south of Fort Worth. “It’s 20 feet by 30 inches,” says bespectacled Ben, “much narrower than a traditional restaurant table. But it fosters communication between strangers perfectly when they sit down.” You see, it’s impossible not to engage in conversation when someone’s sitting close enough to spear the food off your plate.

Call the diners “Strangers in the Night”— just like the background music that might start with Frank Sinatra crooning the old standard and segue into songs from The Big Chill. Whoever’s closest to the record player drops on the next vinyl disk. You read that right: the record player. “It’s often me,” Jennie says, “because I’m over there plating.” At least that was true during one recent dinner, when the turntable was snugged into a corner near the kitchen table, where plates were assembled next to the galley kitchen. An immersion circulator occupied another nook. The long dining table took up most of the quirky loft, where found circular objects decorated one wall —a 45rpm record, a feather wreath, a tire, a Jell-O mold—and the silhouette of an aqua tree all but swayed on another. 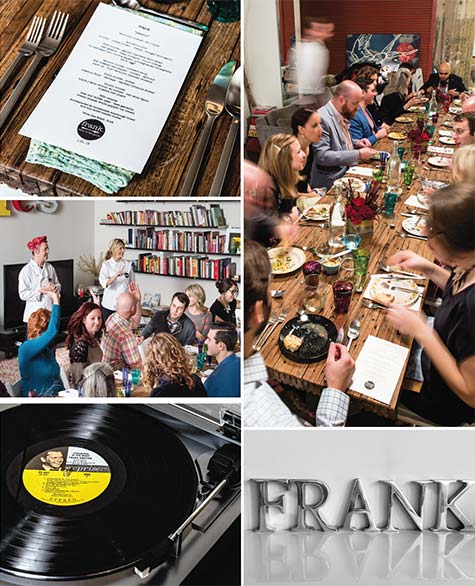 It’s impossible not to engage in conversation
when someone’s sitting close enough
to spear the food off your plate.

The chefs accept voluntary donations to help with expenses ($150 is suggested), but the dinners are labors of love. The location – usually a home near downtown Dallas – is kept secret till a few days before it happens, and the chefs draw guests from a pool of followers who respond to their email announcement that a new dinner’s in the works. Sometimes as many as 600 hopefuls ask to be included. Geoff Demander and his girlfriend have been lucky enough to score invites to about three dinners and enjoy the “uniqueness of the experience.”

The Deep Ellum forensic accountant especially likes the communal table. “You meet new people and dine with the people who made the food.” That’s an important piece: Jennie and Ben join in the feast. Lisa Launius, who’s a nurse, met Ben at a MasterChef watch party in Lewisville near her Carrollton home. “We started doing FRANK,” she says, “because it sounded like fun.” She, her husband and daughter have been invited several times. “We’ve tried cooking some things we had at FRANK. We’re good with short ribs now.” 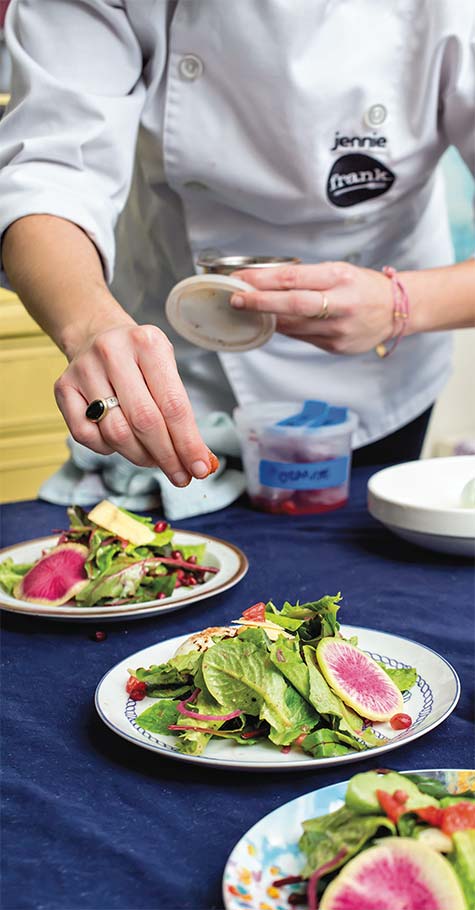 “We make honest food,” says Jennie, who lives in Dallas and guides the creation of each menu. She and Ben are constantly looking for the best ingredients they can find, whether freshly butchered pastured beef from Triple J Livestock in Wilmer or pink peppercorns Ben foraged in Hawaii. At a recent dinner, guests savored a chorizo amuse-bouche made with foraged wild garlic chives; a salad topped with house-made goat-milk bleu ricotta salata and a perfect poached egg from FRANK’s tiny flock of hens; a romesco-inspired soup; sirloin from Triple J; an authentic red velvet cake made without food coloring or beets, and raw-milk ice cream churned to extra richness with duck eggs—and garnished with those pink peppercorns “It’s a lot harder than it sounds,” Ben says, of hand-picking the aromatic berries.

Hawaii speaks to Ben, as MasterChef viewers know. His wanderlust and work as a travel writer have taken him to 40 countries on seven continents, and he hopes to open a guest farm on the Big Island someday. For now, he lives in Lewisville with his partner. His dozen “girls” (hens) – four Red Stars, four Australorps and four silverlaced red Wyandottes – used to live there, too, in a special run. But when Ben went out of town at one point for two months, “they went to live on Grandma’s Farm,” he says, with a McKinney family that sells its pastured chicken and eggs at the Fresh and Local Produce Stand in Melissa. There, the FRANK laying flock could roam free.

“I didn’t have the heart to bring them back to the run,” Ben says. The chefs still visit, and the girls rush to greet them. They lay eggs— lots of eggs—too. 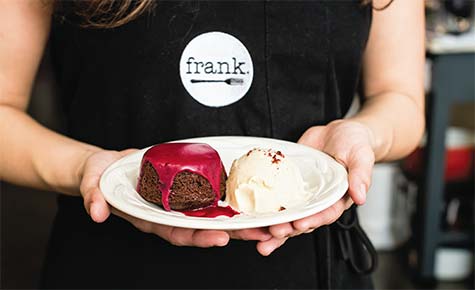 Before each FRANK dinner, the small team of hosting friends gathers for pre-shift shots, something that Ben will have devised, often from the Red River Rye Whiskey from Carrollton that they love. He’ll offer a toast, too. “(The ritual) comes from my years in the restaurant industry,” Jennie says, although she splits her professional time now between food styling and the Spree. “We have a quick moment to bring us together,” she says, before the evening’s guests arrive.

A third chef, Adrien Nieto from the San Francisco area, often helps execute the menu. “He was also on MasterChef,” Jennie says.

“Everyone in (that) one season was wicked tight.” The chefs get serving help from two other Spree members: Chris Michaels and Elizabeth Evans. “I keep it all in the family.”

At a recent dinner themed “passion,” they greeted guests with kir royale. You might assume the theme comes from Valentine’s Day, but “passion refers to the color red,” Ben says. Jennie adds: “It’s red and passionate and flavors we’re passionate about. Each dish has a red component.”

About those perfect poached eggs. This is where you get a glimpse of the duo’s geekiness. Immersion circulator poached eggs are all the buzz among chefs, who take glee in calibrating the water temperature so precisely that they achieve what each considers the perfect orb. The Valhalla temperature? “It’s 63.5 (centigrade),” Ben and Jennie assert. The chefs’ eggs emerge with a shimmery, custard-like texture. On this, their peers will quibble over tenths of degrees. It’s a trip watching Ben intently crack and nest the eggs on salads of local beet greens, baby romaine and blood orange segments in a pomegranate vinaigrette. He gently breaks the shell and slides the egg onto his fingers before coaxing it atop the salad.

Dessert can be a crowning moment at any FRANK dinner, better even than the courses leading up to it, the fragrant handmade breads and the matching wines. For their passion menu, “we couldn’t get away from red velvet cake,” Ben says. What made the original cake red, he notes, was the presence of red-hued phytonutrients called anthocyanins in the cacao. “People used to make the cake with raw pressed cacao powder,” Ben says. “The anthocyanins exist in an acidic environment. They break down and turn brown when they hit something alkaline.” Today, most cocoa is alkaline processed. Hence, the introduction of beets and food coloring in red velvet cake. FRANK’s cake harkened back to the original: “We ordered a raw, cold-pressed cacao from Hawaii,” Ben says. They paired the slices with beet-and-white- chocolate ganache and cream-cheese-white-pepper ice cream, made with milk from Lucky Layla Farms and duck eggs from the Fresh and Local Produce Stand of Melissa.

Come spring, the avid foragers will dive deeply into scouting ingredients for their next project. “I get morel-obsessed fever,” Ben says, at the end of February or early March. You can almost see him rubbing his palms together in anticipation. If it’s been cold enough, he says, he will find them in North Texas. Otherwise, he’ll head to Oklahoma. “If we have a wet spring, I’ll be looking for oyster mushrooms….

They fruit five or six times a year.” Finding a good patch means enough ‘shrooms for an entire dinner. One of his favorite foraged greens is “sweet, green-tasting” chickweed. “It grows in every park in the metroplex,” he says. The two will also be on the lookout for sorrel, “a really, really tart, delicious wild edible.” And don’t forget red bud blossoms. “Red bud blossoms are delicious! A little tart, a little sweet.”

Ben chronicles his foodie experiences in exquisite detail in his blog on his website, benstarr.com. Which brings us to the closing surprise treat. You may face tough odds of ever being invited to a FRANK dinner (although get on their email list if you’d like to be considered, and be persistent). But Ben and Jennie are more than willing to let you tag along on their foraging jaunts. Which gets back to the point of FRANK underground. Because it’s their private endeavor, the chefs can indulge their every culinary whim. They’ve created a forum where they can play with their food and share the result with a handful of adventurous, like-minded folks. “At the end of the day,” Jennie says, “we realize we’re major food geeks.”