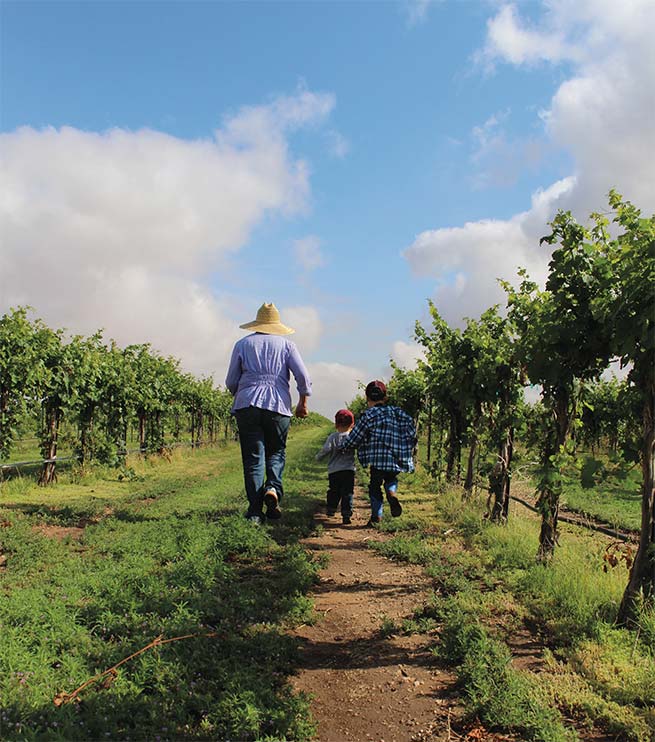 Brenda Canada, a High Plains Winegrowers Association board member,
walks with her grandsons through the Canada Family Vineyard in Plains.
Photo by Christina Feddersen.

The 2015 Texas grape harvest was one for the record books—the first time the state has ever produced a surplus. Until now, there weren’t enough grapes to go around. If abundance becomes the new normal, it will be a game-changer for Texas wine.

A confluence of factors has spurred us to this point. There were no late, bud-killing frosts, says Dr. Russ Kane, influential Vintage Texas blogger and author of the Wineslinger Chronicles: Texas on the Vine. Growers have largely conquered vine-withering Pierce’s Disease, he says, and “different grape types are being planted that fit the environment.”

The emphasis is shifting from varieties that thrive in California and Bordeaux to ones better matched to Texas. Many of the emerging winners are a roll call from countries that border the Mediterranean Sea. Rhône reds that do well include Mourvedre, Grenache and Cinsault. Rhône whites include Picpoul Blanc, Roussanne, Marsanne and Viognier. Italian varieties such as Sangiovese, Vermentino and Dolcetto thrive in Texas, as do the Spanish grapes Tempranillo and Albariño. The 2015 Texas whites—including the state’s first sparkling Roussanne, Temptation, by Eden Hill Winery & Vineyard in Celina—were released in the spring. The reds roll out this fall.

These “newfound” grapes are also generating solid-gold winners. In 2010, Lost Oak Winery in Burleson, southwest of Fort Worth, earned the state’s first double-gold (a five-judge panel unanimously awarded it first place) at the prestigious San Francisco Chronicle Wine Competition for its Viognier, made from grapes grown at Brennan Vineyards in Comanche. In this year’s competition, Texas picked up two double-golds: Los Pinos Ranch Vineyards near Pittsburg, northeast of Dallas, for its Blanco Grande 2014 (estate-grown quasi-native Blanc Du Bois), and Perissos Vineyards and Winery in Burnet for its estate-grown Viognier 2014. Perissos also took Best of Class for two Italian varietals: its estate-grown Aglianico 2014 and its Montepulciano (High Plains) 2014. These, among a slew of golds and other medals. Texas wines are also showing well in other competitions 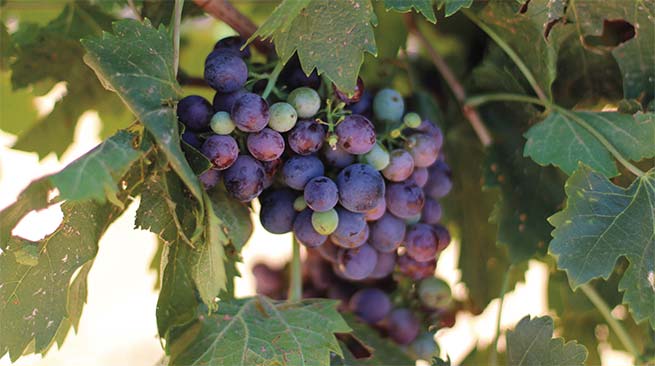 Cinsault is one of the Rhône varietals that’s finding a home in Texas.

“The best area for growing grapes in Texas is north of the Dallas area and west of Interstate 35,” says Grayson Davies, co-owner of Arché winery and vineyard near St. Jo in Montague County. “West Texas is really great—similar to North Texas, but drier.” In any given year, Davies grows 60 to 90 percent of his grapes in his 10-acre vineyard by the winery. “It’s our business plan to get to 100 percent estate-grown.”

But for now, he still buys additional grapes from Childress and Lubbock in the Panhandle. In June, at another important contest, the 2016 San Francisco International Wine Competition, Arché took a double-gold for its 2014 Tempranillo (Childress County) and gold for its 2014 Roussanne (High Plains).

No place offers a better glimpse of our state’s grape-growing future than the High Plains, the backbone of the grower industry. The High Plains American Viticultural Area (AVA) accounts for over 80 percent of Texas’ wine grapes, according to the Texas Wine and Grape Growers Association.

“The independent growers tend to be up on the Plains, the wine grape capital of Texas,” says Jim Evans, winemaker at Lost Oak, which purchases about 90 percent of its grapes, most from the High Plains. Some 10 percent comes from the 10-acre, onsite vineyard.

“There are several (High Plains) vineyard owners doing an amazing job of developing the Texas grape industry,” says Dana Pool, managing partner and CEO at Los Pinos, which sources much of its fruit from the High Plains, but grows Blanc Du Bois and Black Mission in their estate vineyard. “You grow what the climate and soil will let you grow,” she says.

“Family farmers are trying to protect a way of life.
Row crops don’t cut it. There’s not a lot [of water],
but it’s enough to grow grapes for a long time.”
— Andy Timmons, grower 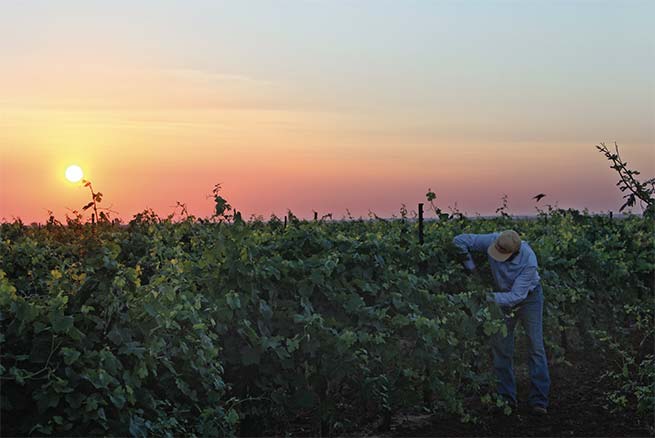 Tending to vines in a High Plains vineyard in the early morning light.
Photo by Christina Feddersen.

Climate, soil—and land prices—make the High Plains the hottest grape-growing region in Texas—maybe in the nation. Understand, this is godforsaken country—relentless miles of terra-cotta-hued soil punctuated by tumbleweeds, cotton fields and pumpjacks. But that flat, open land is deceptive. You don’t realize the terrain ranges between 3,000 and 4,000 feet above sea level. And, as Neal Newsom from Newsom Vineyards in Plains puts it: “There’s wall to wall sun” with no mountains to block the rays. Conditions grapevines love.

“We had perfect growing conditions (in 2015), late rain and huge berry size,” says Katy Jane Seaton, grower and executive director of the High Plains Winegrowers Association. “Everybody had more than their estimates.” She’s part of the two-family Farmhouse Vineyards in Meadow, located in Terry County southwest of Lubbock, and comes by her wine creds naturally: She grew up near Walla Walla, Wash., a resurgent grape-growing area, and her husband Nicholas is the nephew of preeminent High Plains grower Cliff Bingham.

Estimates for total state vineyard acres range up to 8,000, according to the Texas Wine Marketing Research Institute at Texas Tech University. That’s still peanuts compared to Washington state’s 50,000- plus vineyard acres and Napa Valley’s 45,000. Nowhere are more Texas grapes grown than in Terry County at the heart of the High Plains. “3,023 (High Plains) acres were planted last year,” Katy Jane says. “Of that, 2,350 are in Terry County alone.” Outsiders have taken note.

“What struck me was the climate on the High Plains is kind of similar to Central Washington,” he says. “Hot days, cool nights. There’s opportunity here. The land’s undervalued.”

There’s a shift in who’s growing grapes, too, as water grows scarce. “Most people putting in grapes now have a strong agricultural background,” says Andy Timmons, one of the state’s top growers. He owns Lost Draw Vineyards in Terry County and has a hand in 1,000 vineyard acres in Texas. Los Pinos used his higher-elevation Vermentino for its 2015. “Family farmers are trying to protect a way of life,” Andy says. “Row crops don’t cut it. There’s not a lot [of water], but it’s enough to grow grapes for a long time on a lot of acres.” That makes grapes a good alternative or supplement to traditional cotton, peanuts, corn and milo. 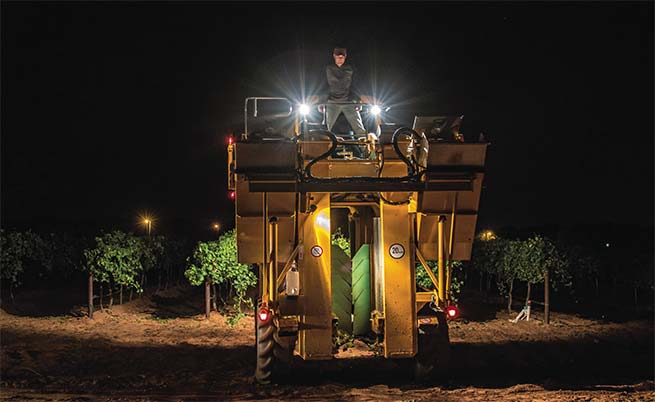 Farmhouse Vineyards co-owner Nicholas Seaton picks grapes with a mechanical
harvester at night, when the grapes are coolest. Photo by Christina Feddersen.

Katy Jane understands the farmers’ quandary firsthand. Her family planted its first vines in 2010, precisely to conserve water. “We have 5,000 (farming) acres total,” she says. “The vineyards are 112 acres, with 42 in production.” The Seatons and Anthony and Traci Furgeson own the farm together. Katy Jane and Traci are sisters-in-law, and Nicholas Seaton and Traci are siblings.

As one of the state’s longtime, premier winemakers, Kim McPherson has a catbird seat on the industry. Besides owning McPherson Cellars and Sagmor Vineyard in Lubbock County, he is Texas wine royalty. His father Clinton “Doc” McPherson helped pioneer Texas’ wine industry, and his brother, Jon, is a California winemaker. His Picpoul Blanc (Timmons Ranch) 2015 earned Best in Show White at the 2016 San Francisco International Wine Competition after winning Best White Rhône Varietal. One of the problems, as Kim sees it, is a lack of infrastructure to handle surpluses.

“We could have 3,000 to 4,000 tons of excess grapes,” Kim says. “Maybe not this year. But in 2017, we could see a huge amount of fruit.” What’s wrong with this picture? “There are no tank farms to hold the excess,” Kim says. “The problem is if no one steps up and builds tank farms and does it right.”

To editorialize for just a moment: It’s not a bad problem to have.

Of course it’s more complicated than merely building tank farms. Here are a few ticklers for the kinds of issues a steady surplus raises. First is capacity, Kim notes. Who’s going to process the surplus? “We have 350 wineries. Only about 10 to 15 are big enough (to handle substantially more fruit). The rest are mom-and-pops that want small quantities. It’s two tons vs. 200.” Quality vs. quantity also gets gnarly. Growing more grapes does not necessarily translate to good grapes or the right prices.

Remember Gregg Marrs, the Washington businessman who touted the potential in the High Plains AVA? He believes so fervently in the future of Texas terroir that he put some of his own skin in the game.

“I recently partnered with Andy Timmons to purchase property outside of Lubbock,” he says. They’re building a bulk winery, Texas Wine Co., in Meadow with a third grower-partner, Kumar Paka. They hope to be operational for the 2017 harvest.

“We plan on working with my winery (Lost Draw Cellars) for some of its production,” Andy writes in an email. “We also want to work with other wineries that buy fruit in the High Plains to make available a custom crush facility…. We will also work with growers who may have unsold fruit and have nowhere to go with it…. We want to use our partners’ contacts around the U.S. to sell out-of-state if it comes to that. We hope that all the fruit will stay in Texas, though.”

ll this promise and potential shouldn’t overshadow the fact that it’s still a mighty tall challenge to grow grapes in Texas—one that rowcrop farmers are advised not to take lightly. “Grape-growing in West Texas is of Biblical proportions,” Katy Jane says, citing what’s happened already during this year’s growing season. “First we had a sandstorm.

Four days later, epic flooding.” One promising new vineyard was flattened by hail. “If you’re prepared for the plague…,” she quips, then you’re ready to grow grapes. “In West Texas, we have them all.”