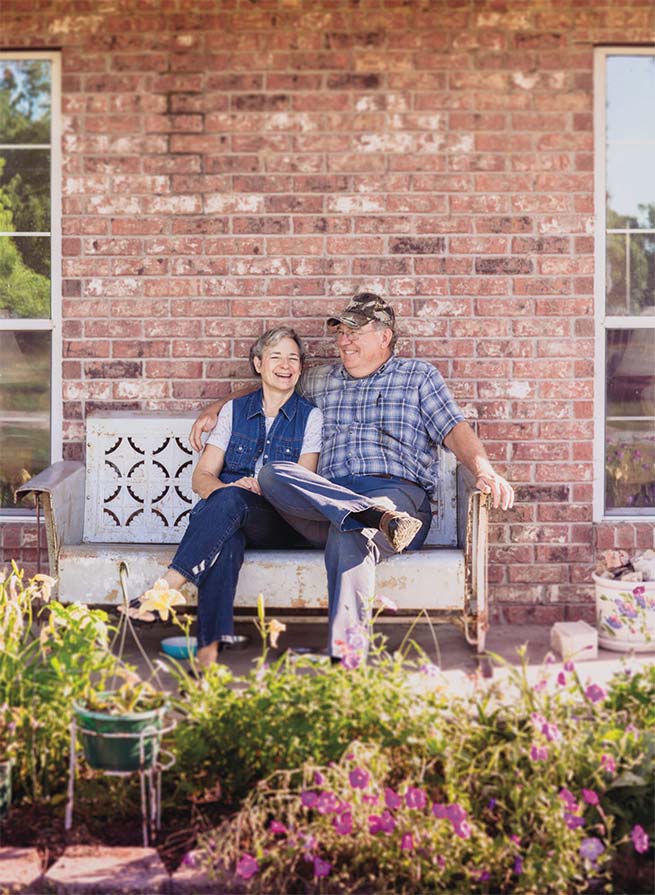 Mike and Connie Hale enjoy a rare quiet moment on their porch.

Thirteen years ago, Mike Hale was ready for the big leap: quitting his Greenville teaching job to work his Windy Meadows Family Farm full-time. The sole breadwinner for the family of ten was pulling down $35,000.

“My son, David, was minding the chicken business,” Mike says, “which made $17,000 the year before.” Mike reasoned that once he was free from his day job, he could double the business in a year to make up the other $17,000.

Much has changed since then.

These days, Windy Meadows is the gold standard for pastured chicken on area menus, featured at places like FT 33, the Rosewood Mansion on Turtle Creek, Wayward Sons and Bolsa. Joanne Bondy swears by it at Stocks and Bondy. Local Yocal Farm to Market in McKinney and Farm to Fork in Arlington are among its retail outlets. The farm is doing so well, it’s expanding into Austin and offering home delivery online to individual consumers.

But here’s the kicker: Most of Mike and Connie Hale’s eight children, who grew up on the farm in the house that Mike built, have come back like chicks to roost and work some aspect of the business with their dad. An additional 40-ish part-timers help keep the farm humming. 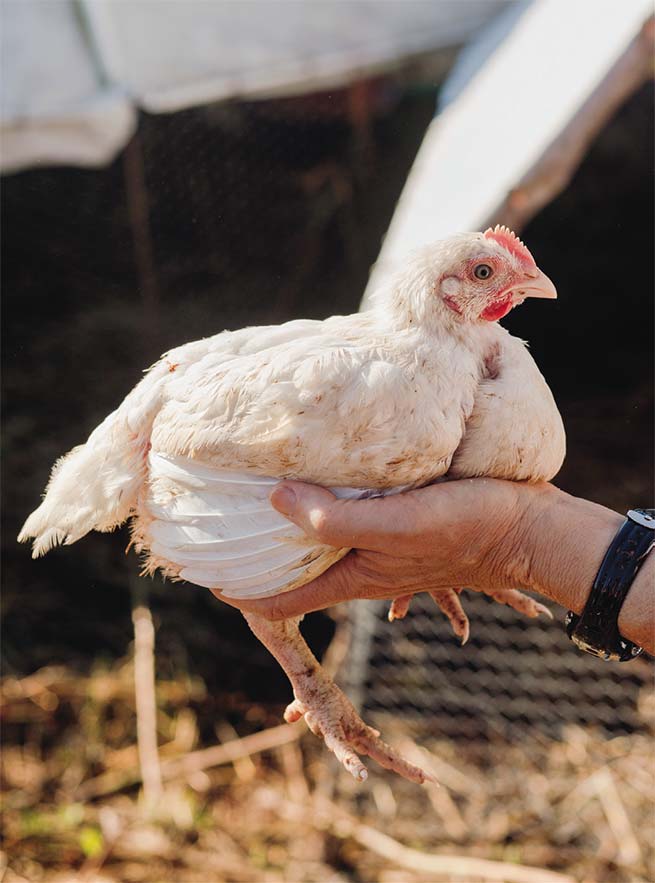 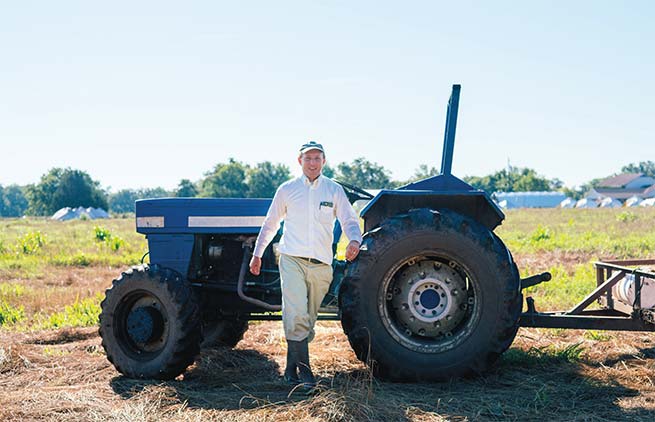 “Mike and Connie Hale embody everything that is authentic about farm to table,” declares farm-to-fork consultant Sharon Hage, who was among the first Dallas chefs to feature the chicken at her legendary, now defunct, York Street Café.

“I still remember the first taste,” she says. “‘Wow, chicken that tastes like chicken!’ is what the crew and so many of our guests would exclaim. Pan Roast Windy Meadows became a top-selling seasonal favorite.”

“We do love Windy Meadows chicken,” says one of the newest fans, Gemma chef-co-owner Stephen Rogers, who came to Dallas fresh from Napa, hotbed of farm-to-table sourcing and exemplary pastured products. “Mike is awesome—I was introduced to him by my former sous chef Rick Graff. He does an amazing job, and it is great to have a local chicken available to us raised with such care.”

All the pastured chicken action still happens on the same 42 acres the Hales started with, nestled in rural East Texas near Campbell. There, they raise their chickens, eggs to harvest, and are in the process of trading out their 80-plus “yurts”—10-foot-diameter, open-sided, geodesic domes —for larger enclosures. They’ve also become the go-to chicken processor in North Texas, providing (USDA inspected) minimally traumatic, humane slaughter for a host of other small farmers’ flocks. Staff handles the birds gently, Mike says, right up to the moment of the quick, fatal cut.

It’s been more than 10 years since I’ve visited the farm, and the photographer and I arrive on a sunny day following heavy rains. The only thing that lets us know we’re in the right spot (GPS fail) is the tiny mailbox and in the distance, curious rows of yurts. Closer to the two-story house, the ground is muddy, but it’s also bursting with new green shoots and flower-bud pinks. Nearby, the cattle that enrich the pastures are temporarily sequestered, although one has managed to break through the fence. A cream-colored Great Pyrenees lazes under a weathered Dodge pickup between the house and the modest white slaughterhouse, and the above-ground swimming pool nearby is actually a water tank to guard against future droughts. “This is Texas,” Mike says. “This is what we enjoy, having to learn the patterns. You have a couple of drought years, then wet ones follow.” Enjoy—surely he says this with a pinch of irony. 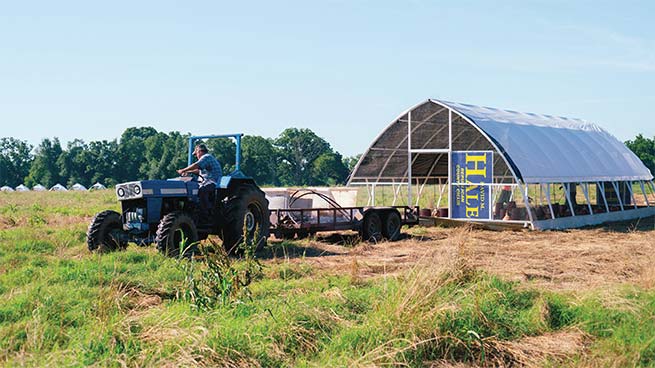 Mike Hale tractors a “cathedral” pen, made with David’s repurposed
campaign signs, to new pasture. Yurts are in the background. 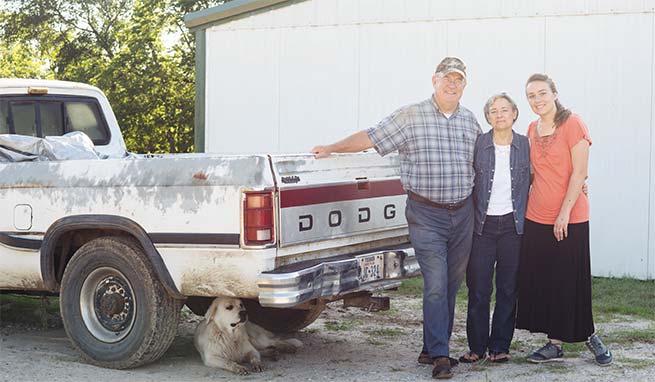 Mike remains the easygoing patriarch, whose smile lines have grown deeper behind his wire-rimmed spectacles, and Connie cuts as trim a figure as ever. The biggest change I see: All those kids have grown up. Here’s Sarah, 28, who handles marketing and sales. Her husband Cody Helm does sales and accounting and attends school. Here’s David, 33, on his way to move some yurts, which are built on runners called sleds that allow them to be rotated to fresh pasture daily. Mike excuses himself to check in with Peter, 18, and the crew building a new brooder. “If we don’t get the roof up,” Mike says, with more rain in the forecast, “we may not get to go to the Saturday wedding.” That’s because they’ve got a full complement of newly hatched, cheeping baby chicks that need the brooder now.

Daniel, 23, manages the processing facility and the incubator where eggs are hatched. Hannah, 27, is a paralegal who co-manages processing and handles human resources issues. Jack Blair, the CPA husband of Rachel, 30, just joined the team, and Esther, 25, works part-time in accounting. The only true outlier, Andrew, 20, is a West Texas firefighter. Before heading back to Odessa, he grabs and hugs newly pregnant Sarah and says he’ll be back to join the business at some point.

If there’s a No. 2 at Windy Meadows, it’s David, who oversees the day-today care of the birds. (He demurs, saying only that if the family needs a decision in their dad’s absence, he’s probably the one they look to.) His job is chickens: “Daddy wants 1,500 to 2,000 a week ready to slaughter,” and that’s what he delivers, through the heat of summer and the chill of winter. When downpours come too fast to tow all the yurts to higher ground, he’s the one who coordinates the effort to quickly pile straw inside, so the birds will have someplace to climb above rising water. That’s one reason the white birds have brownish feathers on our visit; it’s been a muddy few days.

David is one of the Hales’ chicks that got away, albeit temporarily. For five years he worked in building operations in the Dallas area. “I got skills and tools in Dallas that gave me a different perspective,” he says. It helped him improve the farm operation. The city work came easy, he says, and allowed him to accumulate some capital—he continued living at home and saving money. “I wanted to be where the Lord wanted me to be…but I always wanted to come back to the farm.” He laughs: “I daydreamed about a ranch. I always wanted to have cows.” Now he (happily) herds chickens.

The Hales are especially cognizant of the flood hazard, after an unseasonable rain one July. “I was down there [in the pasture] with the chickens,” Mike says. “It was 11 at night. The water was two inches high. [Suddenly] it went from two inches to six inches, to the top of the sleds.” The birds were in danger of drowning. He woke up everyone in the house, and they ran out and scooped up as many as they could. Connie remembers hoping there were no snakes as she reached in to grab the fowl, with insects and flotsam floating atop the murky water. “We probably lost 200 chickens that night,” Mike says. “That was a hard night.”

These days, Windy Meadows is transitioning to new, larger enclosures that hold 600 chickens each but still are rotated on pasture daily. “The chickens like it more,” Mike says of the larger pens, which the family dubbed “cathedrals” because of their shape. “You can tell when they’re happy,” Mike says. “Originally they were forest animals, so they like it dark and dreary but also to have some space.” The photographer and I watch as Mike and David hitch a tractor to the sleds, while others inside the open shelters shoo the birds away from the back edge, where they seem utterly oblivious to the impending danger of being crushed. David designed the cathedrals, right down to re-purposing his old campaign signs as doors.

Mike has no ready explanation for why the kids came back, except to say it’s God’s plan. This is a family that lives its Christian faith quietly through word and deed. “I gave them room,” he says. “It’s not that they weren’t successful elsewhere. They wanted to be back on the farm.”

It started, he says, when he would get overwhelmed, what with overseeing the farm, selling to chefs, processing chickens, filling orders, getting them delivered, working the Dallas Farmers Market with the original Texas Meats consortium (with Rehoboth Ranch and Truth Hill Farm) and keeping ahead of the books and taxes—tasks that increased exponentially with growth. “When something came up, and I was broken,” Mike says, “they would step up and say ‘I can do that.’”

“When we were little, we used to tease Daddy,” David says, “that he couldn’t work by himself. He always took one of us with him. He would say he ‘needed help.’” Older, wiser and a father himself, David knows better: “He just wanted to take us along.”

Who knew all those “chicks” would flock home to perch? And not without a few surprises. With eight grandchildren and two more on the way, Mike and Connie Hale are reveling in the bounty of a new crop.

EDIBLE ESSAY: A COMMUNITY OF FARMERS AND CHEFS
Recipes For a Weekend Fall Fête