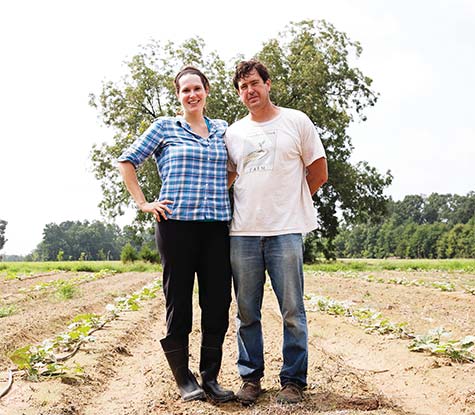 You’re 28. You’re diagnosed with Stage 4 lymphoma. The doctors tell you to get your affairs in order. Then you hear the optimistic prognosis: Memorial Sloan Kettering Cancer Center gives you a 40% chance of living. Two more years.

“For a long time,” says Comeback Creek Farm’s John Kilburn, “it was hard for me to look at my life ‘later on.’” He’s standing inside a chicken-house-turned-greenhouse at his Pittsburg, Texas farm, sweat beading on his freckled brow beneath curly brown hair. He’s got a day’s worth of stubble and he’s buff, wearing a Comeback Tshirt and jeans well dirtied from work.

Those odds? The Pittsburg native beat them. He’s 45 and cancer-free. He got the daunting diagnosis while living and working in New Jersey. The chemo was a beat-down, and he became interested in organic foods as a way of supporting his health. But they were expensive. “I started gardening,” he says, because he had a good-sized backyard. 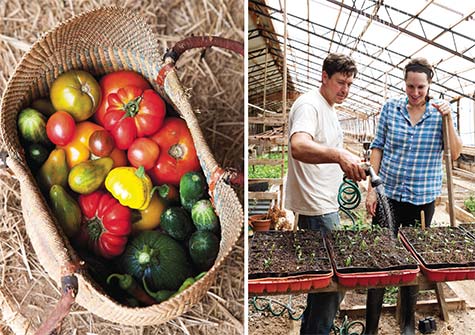 John and Aliza watering seedlings in the
chicken-house-turned-greenhouse.

“I wanted to do something I did not have to retire from.”

He moved back to Dallas in 2003, but already the wheels were turning. “At that point, I was looking ahead in my life,” he says. “I wanted to do something I did not have to retire from.” He started a garden on a half acre at his brother’s place in Pittsburg and grew a killer crop of tomatoes. “I got lucky with heirlooms.”

This was long before Comeback Creek Farm became synonymous with interesting, organically grown produce, some of the most sought-after in North Texas. Deep Ellum’s Local owner Tracy Miller was among his first chef customers, also Julian Barsotti, chefowner of Nonna and Carbone’s Fine Food and Wine, and Sharon Hage before York Street closed. Graham Dodds of Hibiscus was an early adopter (during his days at Bolsa) as was Jeff Harris, now at AF + B (American Food and Beverage in Fort Worth), and Matt Balke, who’s chef de cuisine at the new Plano satellite of Smoke. Andrew Bell continues the longstanding tradition at Bolsa. Comeback has an especially strong relationship with Consilient Restaurants chefs, runs a popular CSA (Community Supported Agriculture) and sells locally at the Winnsboro and Mount Pleasant farmers markets.

John eventually quit his Dallas job and bought a small farm near Pittsburg in 2005 with five or six usable acres, working locally to supplement his farm income. He’d finish his night shift, then drive his tomato bounty the 125 miles to the Dallas Farmers Market. “I showed up loaded down with tomatoes,” he says, “in laundry baskets, boxes.” 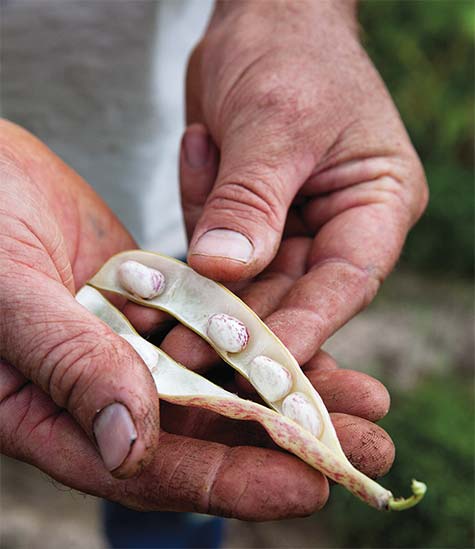 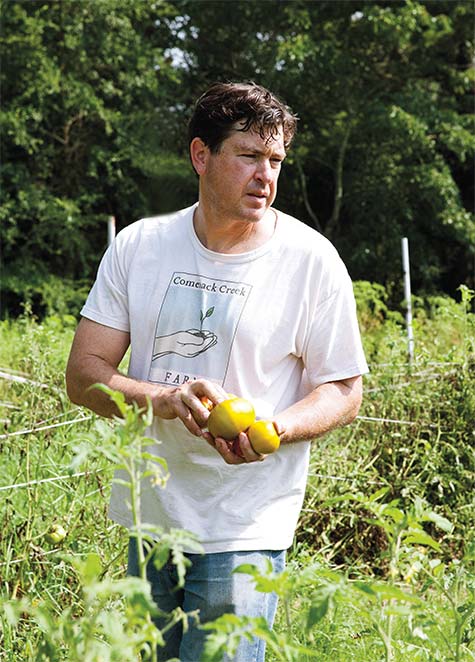 One of his customers was the pastry chef from Local. Aliza Shier (pronounced “Eliza”) was an SMU grad who had worked her way up from hostess and taught herself to cook by reading Alice Waters, the famous chef-owner of Chez Panisse in Berkeley, Calif. Back in the 1980s, Waters was a linchpin in the Modern American farm-totable movement. “I was looking for fresh fruit,” Aliza says of her first encounter with John at the Dallas market. “He had dewberries,” she says, “and his produce looked more inviting than other vendors.” She tried to persuade him to grow more unusual vegetables.

“She had these lists she submitted,” John says, gesturing wildly. “She sends me four, five pages, front and back, sources for seeds, growing tips…. not just orange carrots, but Dragon carrots.” Maroon skins, orange flesh. “And turnips. ‘Why can’t you grow turnips?’ Turnips, turnips, turnips.”

He’s teasing Aliza, and she’s laughing as we enjoy a break in the relative cool of Comeback Creek’s greenhouse, three farm dogs panting at our feet on the dirt floor. As you might suspect, the cheffy customer turned into a friend, then more than a friend and eventually his wife. Aliza is expecting their second child in October, a sister to 14-month-old son Sam.

When Aliza was first introduced to farm life, the Dallas native says, “all I remember is I did have idealistic notions.” She smiles, wiser now. The reality of farming the sandy loam in rural East Texas is dirtier, weedier and grittier than what she expected. “You have to be all about production, not perfection,” she repeats like a mantra, as we bounce along in a farm utility vehicle to the outdoor fields of tomatoes, eggplant, peppers, squash and more. Her chestnut hair is pulled back with a headband, and her baby bump barely shows under her blue plaid shirt. She’s wearing dark pants and muck boots.

Named for a wooded creek that disappeared
in the summer on John’s original farm and came
back waist-deep with spring rains, Comeback
Creek started operating its CSA in 2010. 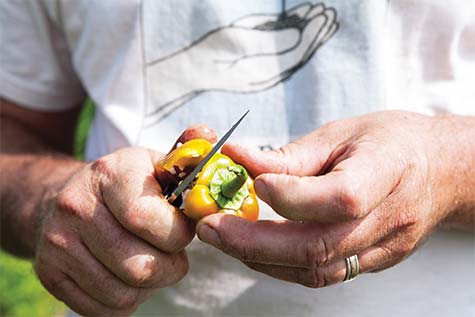 It’s John and Aliza’s farmer-chef match-up that makes Comeback Creek unique. Aliza doesn’t submit four- and five-page lists anymore, but she’s deeply involved in researching and choosing the seeds for what they grow. She has a chef’s sense about what’s unusual and compelling. Their choices also reflect what did well the season before, she says.

We’ve stopped the utility vehicle at the tomato patch, an acre tangled with tomato vines trained up on horizontal wires like grapevines. As we walk the rows, John tosses a tomato up and down in one hand like a baseball. The tiny red Jasper cherry tomatoes are so prolific that the plants look like berry vines. Their flavor is sweet and intense. But they won’t be back next year. Too labor-intensive to harvest, John says. They have one full-time farmhand, Oscar Martinez. At the pepper patch, bright red and green shisitos glisten in the high sun. John pulls out yards of Bermuda grass runners between the plants. They like the recent rain that’s fallen on the farm, too, he says. He shows me a bug on a squash leaf that looks like a Mondrian version of a ladybug. Even the county extension agent who lives next door is stumped by its identity. Grasshoppers, who jump up like popcorn when you brush through the grassy patches, are an ever-present nemesis.

Named for a wooded creek that disappeared in the summer on John’s original farm and came back waist-deep with spring rains, Comeback Creek started operating its CSA in 2010 and was humming along with restaurant orders and Dallas farmers market treks, most notably to White Rock Local Market. That was a year before the state was slammed with the double-whammy summer of hellfire. “He realized after the heat and drought of 2011 he would need more usable land,” says Aliza, so he sold the small farm and bought a 100-acre parcel that was once a Pilgrim’s Pride chicken farm. That turned out to be a stroke of luck.

We’re back sitting in the one they use as a greenhouse now, where shimmering green arugula takes up 48 feet of bed space 32 inches wide and, beyond it, 30 feet of green-and-magenta Swiss chard leaves fan the air. Tiny plants started from seed dot myriad boxes. All of it takes up a fraction of the available space.

“We started using the chicken houses as greenhouses,” John says. Just shabby tin sheds, they aren’t much to look at. But they came equipped. “They had very deep wells because the chickens needed water. Chicken houses have heaters…. Computers open vents and turn on fans. You have to keep it in the 80s for chickens. And the front wall gets soaked with water at certain temperature.” Envision an old-fashioned swamp cooler. They’re also sturdier than the typical greenhouse. John points out the struts overhead that he helped install when he was in high school to keep the roofs from caving in on the chickens one snowy winter, unaware of the role the structures would play in his future livelihood. He’s torn down several of the 24 chicken houses they started with and sold three to a group from Belize (that’s another story). They have plans to develop four more, two of them by this winter.

John and Aliza’s weeks are long and intense, especially during the prime growing seasons and ahead of preparation for the new baby. But no one’s complaining. “On Monday, we’re picking and packing until suppertime,” Aliza says. She barely mentions the time she spends each week taking and processing chef orders and helping select what to put in the CSA shares, which include recipes and other tips. “On Tuesdays, John gets up early at 4 a.m.,” she says, to get their driver Jonathan Garcia set up for CSA drops and restaurant deliveries in Dallas and Fort Worth. John farms all day. “Wednesday,” Aliza says, “it’s the local delivery to Mount Pleasant and Pittsburg, and occasionally Longview. Thursday is picking and packing. Thursday night is the Mount Pleasant Farmers Market. Friday is a repeat of Tuesday, and Saturday is the Winnsboro Farmers Market.” Simply put, they work from dawn to dusk with a midday break for lunch. “Sunday, we try to take off,” she says—unless something else clamors for attention, like mowing back the eager grass that’s sprung up with the rains.

“It’s still surprising, all the work it takes,” Aliza observes. “You never get ahead. But we’re still passionate and excited every season.” And grateful—for the second chance at a life well lived.