Dean Lusk and Hamilton Daniels didn’t start out growing oyster mushrooms. The entrepreneurs began their partnership 20 years ago, first as real estate investors, then bringing wholesale ecigarettes to Texas and England. Their next venture was expanding their website design and programming business.

But Dean, 43, was tired of sitting behind a computer. He wanted to do something else.

“What do you have in mind?” Hamilton, 44, an English transplant to Texas, asked.

“Why don’t we find some sort of natural, locally grown, sustainable food source?”

“Really?” Hamilton said. “You want to be a farmer?”

The first spore of Fun Guys Gourmet Mushrooms was launched. It was set in motion earlier, after a three-month trip to England in 2012, when Dean, a fourth-generation Texan, began thinking differently about his health, he says.

“This was my first time overseas, and I wanted to try everything. I probably ate three times as much as I do here.” The self-professed sweet tooth was lured by the pastry shops. “Which do you want?” he says, recalling the many scrumptious desserts. “I want ten of ‘em!

“I’m not a healthy eater,” Dean admits. “I’m a meat-and-potatoes guy. I’m not an exerciser either,” he says. “I didn’t exercise over there.”

Yet, during those three months Dean still managed to lose 15 pounds. “I had way more energy,” he says. “It was a noticeable difference.” When he returned to Texas, he resumed his old habits and gained weight. Dean felt he pinpointed the cause: processed foods in the U.S. versus fresh food habits in England.

“Food sources are dramatically different over there,” he says. “They don’t have high fructose corn syrup. It’s banned throughout the country.” Fresh, locally grown produce and meats are readily available.

“You don’t go to a big grocery store like Walmart to buy two weeks’ worth of groceries. You buy one or two days, so you’re eating fresh, right then.

Dean convinced his partner, who was dubious at first, to give oyster mushrooms a go. Dean was familiar with the process, as he had grown them 20 years earlier with his father-in-law, a cattle rancher and small-scale farmer.

“If nothing else, it’ll be fun,” Hamilton said at the time. “A little side project.”

The two created a contained space inside a room in Dean’s house. They built wooden racks and bought enough supplies from the local feed store in Grapevine to make 10 bags of mushrooms.

The process they used then was the same one they use today. Using organic methods, each plastic bag is filled with wheat straw and cottonseed hulls, which is then pasteurized by boiling. After it cools, mushroom spawn are mixed in, holes are poked in the bag, and then it hangs for 10 to 12 days. This is called a spawn run. During this time, the bag turns pure white as the mycelium takes over.

“Lo and behold, in the next three days—baby mushrooms!” Hamilton says. “We call them our flowers. They’re edible art.” But it wasn’t that easy.

“What we found out since we started this is there are so many little intricacies involved in growing the mushrooms,” Dean explains.

“They choke each other, basically.” Hamilton says.

The two also discovered the challenge of maintaining the cooler temperature and high humidity during the Texas summer while exchanging the air.

The entire mushroom growth cycle takes eight to nine weeks. “If you have done everything perfect and it’s correct, you get a good mushroom in the last five days. But if you miss something or didn’t do something right along the way, you’re basically waiting eight weeks to find out you don’t have a good crop,” Hamilton says.

A single bag can “flush”—meaning produce mushrooms—up to seven times, producing fewer and fewer mushrooms each time. Once the bag no longer produces, what’s left is the nutrient-rich mycelium, which Dean and Hamilton donate to the Coppell Community Garden for composting.

“There’s zero waste in our business,” Hamilton says. Chef Chris Flahaven, who owns Prime Farm to Table Restaurant in Flower Mound, was one of their first customers.

“When Hamilton and Dean brought in beautiful fall oyster mushrooms to me for the first time,” he says, “it brought me back to foraging in Connecticut— beautiful clusters and different shades of gray with a nice nutty and woodsy smell. I enjoyed talking to them and seeing how excited they were about growing mushrooms and fi nding ways to improve.

“The larger caps and smaller stalks make the whole mushroom tender,” he says. “I knew we were going to be friends…. That’s what I get out of owning a farm-to-table restaurant. I change my menu daily, showcasing farmers and their products when they’re at the ripest, freshest peak. That shows in my dishes and connects my customers to the farms. Plus, it tastes ten times better.”

Dean and Hamilton sold their first oyster mushrooms retail at the Richardson Farmers Market on Valentine’s Day 2015. They added Coppell Farmers Market a month later under the name Fun Guys Gourmet Foods. Most Saturday mornings, they sell out by 11 a.m.

The oyster is “a beautiful mushroom, which turns velvety in a sauce but stands up to sautéing, grilling,” chef Chris says, “and gets a nice, golden color with a slight nutty flavor.”

The most common commercially grown mushrooms in North Texas are white buttons, baby bellas and portobellos. Oyster mushrooms have a short shelf life so freshness is a priority. They can’t be frozen; they must be kept refrigerated.

“As far as we know, we’re the only ones in North Texas that grow [oyster] mushrooms,” Dean says. “They’re very meaty. Totally different in taste. The difference between one species [of mushroom] to another is as far a difference as an orange is to a potato—taste, texture, flavor—everything.” The pearl oyster—also called the steel oyster—is Fun Guys’ full-time, flagship mushroom. “It’s the best selling and the best tasting,” Hamilton says. “We also produce pink oysters and gold oysters three times a year. The pink oysters do well around Valentine’s Day, and chefs order them in June and July. The gold oysters sell well during the holidays, around November, for Thanksgiving. We’ll be adding the King oysters and Lion’s Mane in January.” The colored varieties turn light brown when cooked, he explains.

The Fun Guys recently decided to move from their grow-house model to true urban farming by setting up a modular unit created from a shipping container on fi ve acres west of Denton. Two of the containers will be dedicated to mushrooms and hold 60 bags, and another container will be dedicated to growing microgreens. They will soon be providing oyster mushrooms through H.E.B. Select stores and Central Market.

“This is the kind of business that we can grow and leave for our families and continue growing in the natural food space. It’s really exciting for us. This is the beginning of something that can expand a lot bigger than just mushrooms,” Hamilton says. “After having been in the farmers market scene, we just realized, hey listen, people have a real appreciation for fresh, local grown food. If we can provide this on a mass scale here in DFW, that should be our goal. If everything falls in line, and the stars are on our side, then we should grow this out from DFW throughout the entire state of Texas. That’s what we’d love to see.” 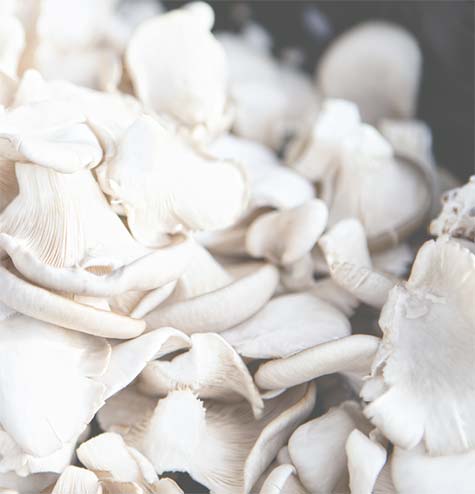 FIVE WAYS TO USE OYSTER MUSHROOMS 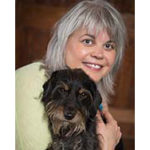