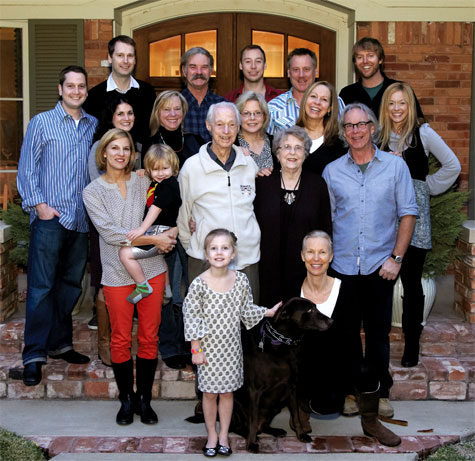 I love the holidays. I love the way our tranquil empty nester household buzzes again with activity as extended family members swoop home. They bring chaos, laughter, photo ops and a bottomless sink of dirty dishes, and I love every bit of it.

The family’s rallying spot is the kitchen, and food is the centerpiece of our time together. Opinionated, diverse eaters, we run the gamut from vegetarians to Paleos. Fortunately, most enjoy cooking. Gathered around the countertop, everyone swaps stories, absorbing our family’s food traditions while slicing, chopping and stirring.

The winter issue of Edible Dallas & Fort Worth focuses on families and communities connecting through food. Writer Amy Severson, who has salvaged hundreds of vintage community cookbooks over the years, ruminates on the lessons to be learned from their dusty pages. Artizone’s Lior Lavy, who often watched his grandmother Mutzi make chicken soup, honors her memory by sharing her story and recipe.

Writer Ellen Ritscher Sackett profiles two Dallas food innovators. She visited with Chef Mansour Gorji of Canary by Gorji restaurant and learned of his travels and upbringing, both of which influenced his cuisine. His road to becoming a chef began in his grandmother’s kitchen.

Ellen also writes of Meaders Ozarow who, along with her husband Robert, learned the techniques of artisan breadmaking from a friend in New York. When they opened Empire Bakery in 1992, Dallas had few options besides boring white sandwich slices. It’s our community’s good fortune that they decided to share their thick-crusted loaves with us.

We pay tribute to two families in the farm and ranching communities. Kim Pierce brings us the story of Robert and Nancy Hutchins of Rehoboth Ranch. They were early believers in the virtues of grass-fed meats, and have passed those values on to their twelve children.

I had the pleasure of visiting with John, Delbert and Denise Stufflebeam of Sunny Side Up Farms. Though at retirement age, they’ve just embarked on a new career in farming. The source of their inspiration: John’s son Brad, a long-time organic farmer, who’s getting a kick out of mentoring his elders.

If you love food, history or both, make plans to attend Foodways Texas’ annual gathering, to be held in College Station in March. Though academic in focus, the Foodways get-togethers are anything but dry. To get a taste of their pursuits, read Kelly Yandell’s wonderful account of their efforts to document our state’s diverse food stories.

We’ve included holiday recipes from some of our favorite cooks, including former Dallas Morning News food editor Dotty Griffith, whose classic Texas Holiday Cookbook has been reprinted, just in time for the season. Don’t miss our Notable Edibles. Writer Heidi Shipp offers gift suggestions and an extensive guide for keeping your holiday dollars in the neighborhood.

To each one of our readers and advertisers, thank you for your support. May your New Year be filled with family, friends and seasonal baskets of local foods.