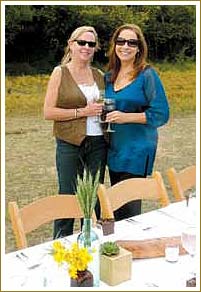 In our cover photo by Sarah Kate, a long communal table awaits its guests. Dotted with 100 place settings, it’s dressed simply in a swath of white linen. Wildflowers in vintage vases and candles in scavenged Mason jars adorn its length. The “Chefs for Farmers” dinner began at 4 p.m. under a bright October sky and spilled into evening, lit by glowing votives and a canopy of stars. In the middle of Farmer Marie’s field, we chatted with our congenial tablemates—new acquaintances—like they were long lost friends. How could we not? We were sharing food that had been grown nearby, expertly prepared by some of the area’s finest culinary talents.

And let’s not forget the free-flowing wine. For a moment, the world was perfect.

“Gardens, scholars say, are the first sign of commitment to a community. When people plant corn they are saying, let’s stay here. And by their connection to the land, they are connected to one another.” The quotation by New York Times gardening writer Anne Raver inspired photojournalist Katie Ruppel to write about just such a garden, the Fairmount Community Garden, in her own Fort Worth neighborhood. In this issue, she gives us a little tour of its plots.

Writer Valerie Gordon Garcia traveled down a country road to Windy Hill Farm where she worked for several days alongside organic farmer Ty Wolosin. What makes a young man devote himself to this all-consuming way of life? Her story, combined with Richard Adams’ superb photography, paints a beautiful portrait of a man committed to the land, as well as to his community. His is the new face of farming.

At the Modern Art Museum of Fort Worth, Chef Dena Peterson’s innovative cuisine is jointly inspired by her commitment to area farmers and the creativity that surrounds her. Writer Anna Caplan and photographer Matthew Rainwater artfully capture Café Modern’s urban elegance. (Both writer and photographer tortured their editor while on assignment with mouth-watering e-mails about the meals they were enjoying.)

With a little help from her friends, writer/photographer Lauren McClure takes the locavore challenge and cooks up a party at the Bishop Arts bungalow she shares with her husband Russell and dog Della Bea. In a story that will make you smile, she lays out the ways she and her dinner companions were changed by their hunt for local foods. Her recipes are simple, healthy (yes, even the bread pudding) and absolutely delicious. Within these pages, you’ll read about a fashionista and her food haunts, a touring musician and his locavore kitchen and a woman who yearns for the flavors of home.

There is the eco-friendly radio host and the celebrity gardener, the vegetarian chef and the purveyor of free-range game.

North Texans are as varied as the stories in this issue. In a place so grandly diverse, what binds us? According to Anne Raver, it’s the land. Whether you till the earth, create the meals or just enjoy the harvest: All at the community table are connected to the land.

‘Tis the season of communal celebrations. The trees are bare now, but not for long. “Gardens, scholars say, are the first sign of commitment…” to one another.