Rinse the lentils and combine them in a large pot with four cups water. Bring to a boil, then lower the heat and simmer the lentils for 25 minutes, or until tender-firm. Stir in a teaspoon of sea salt, remove the lentils from the heat, and skim off any foam that may have formed on top.

Meanwhile, heat two tablespoons olive oil in a large sauté pan, add the chopped onion and a pinch of sea salt, and cook slowly until the onion is soft, about 8-10 minutes. Add the chopped leeks and continue cooking for another twenty minutes, stirring often, until the leeks and onions are turning golden.

Add the onions and leeks to the lentils, along with the diced sweet potato, carrots, celery, another 3 cups water, half a teaspoon of sea salt and a bay leaf. Simmer the soup gently, covered, for twenty minutes.

Meanwhile, wash the chard, slice away the stems, and coarsely chop the leaves. Add the chard and simmer the soup another ten minutes.

Lightly toast the cumin seeds in a dry skillet, then grind them in a mortar and stir them into the soup. Add the cilantro, parsley, a pinch of cayenne, and the vegetable broth. Heat everything together for a few minutes, then
add lemon juice to taste.

Drizzle some fruity green olive oil over each steaming bowl of soup as you serve. 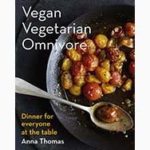 Longtime Ojai, California resident ANNA THOMAS wrote the iconic cookbook The Vegetarian Epicure while still a student at UCLA, followed by its two sequels and Love Soup. Her newest book, Vegan Vegetarian Omnivore: Dinner for Everyone at the Table (W. W. Norton & Co., 2016), was released in April.