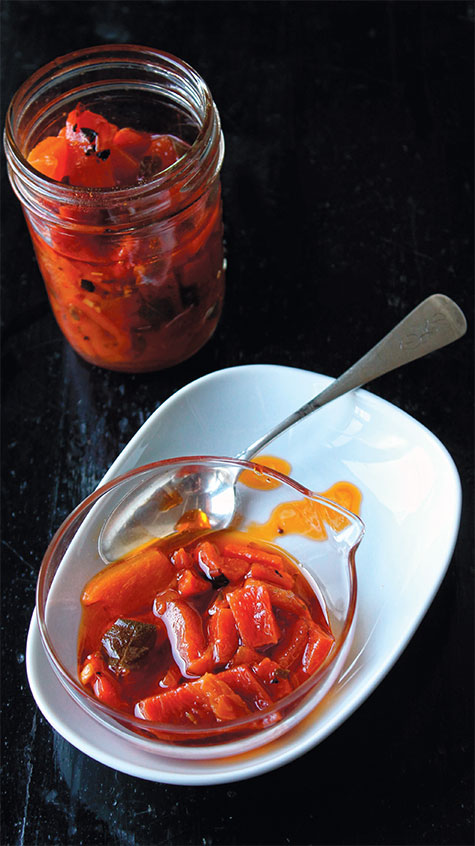 Marinated chopped peppers are an incentive to make great food fast. Just the fact that I can spoon the peppers out of a jar and not even have to cut them up has led to spontaneous and delicious dishes. For example, I toss these peppers with boiled shrimp, garnished with parsley, or make a quick dip or spread by mashing the peppers with feta cheese or softened goat cheese and dill or cilantro. Other options: brown sausages, chicken parts or lamb shoulder chops, add the peppers and finish cooking. I love to make pimento cheese (in the food processor: ½ cup homemade mayo, ½ cup grated cheddar, ½ cup goat and/or cream cheese, 1/3 cup drained, marinated peppers). And then, there’s always, romesco.

Char and peel the peppers (see below). Allow the peppers to come down to room temperature. Halve the peppers and remove the seedpod and stems. Chop the peppers.

In a medium saucepan, combine the vinegar, lemon juice, olive oil, garlic, oregano and salt, and bring to a boil over medium heat. Add the peppers and toss them in the marinade.

Have ready 3 clean pint jars (or a combination of half-pints and pints) and bands, and new lids that have been simmered in hot water to so then the rubberized flange. Spoon the peppers into the jars and cover with the marinade, making sure the garlic and oregano are distributed evenly throughout the jars. Leave ½ inch of headroom. Wipe the rims, place on the lids, and screw on the band fingertip tight.

Process the jars in a water bath for 15 minutes at sea level. Process the jars for an additional 2 minutes for every 1,000 feet above sea level. Remove from the water, let the jars rest for 24 hours, and then check the seals. If the jars seem a little greasy, it is okay. Just wipe them down with a bit of vinegar. The peppers may float at first but don’t worry; they will settle down.

HOW TO BROIL PEPPERS 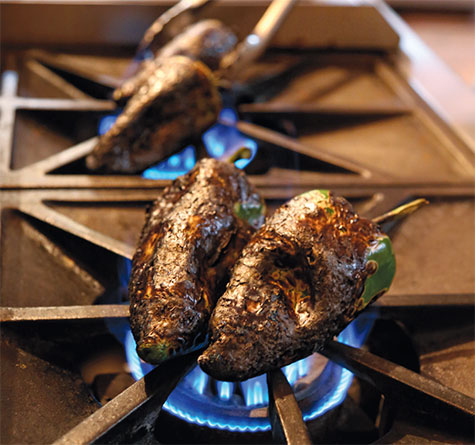 Some recipes will call for the peppers to be charred and the skin to be removed from the pepper. You can do this under the broiler or on top of a gas burner, directly on the heat. Under the broiler is more convenient and faster, but the peppers easily overcook. Cooking on the burner, where you place a couple of peppers on each burner and turn them with tongs until they are blistered all over, is more work, but produces a more controlled result. (If you use this technique the kitchen will fill with a tasty burning smell. I always get calls from my neighbors when I use this method.) I use the broiler with the door open so I can watch them more closely. Heat the broiler to hot. Place the peppers on a cookie tray. Place under the broiler. Turn the peppers as they blister. It takes about 5 minutes for a tray of peppers to roast. Some people like to put roasted peppers in bags to loosen the skin for easy removal. I don’t do it when using the broiler to blister peppers, because doing so steam cooks the peppers. As soon as you can handle the peppers, remove the skin. Usually, the skin will slip o in a few big peels. If some skin sticks, it’s okay. Remove the seedpod, and rinse out the seeds.

Eugenia Bone is a cook and author whose stories and recipes have appeared in publications including The New York Times Magazine, Saveur and Food & Wine. She is also the author of 5 books. Visit Eugenia’s blog at TheKitchenEcosystem.com.