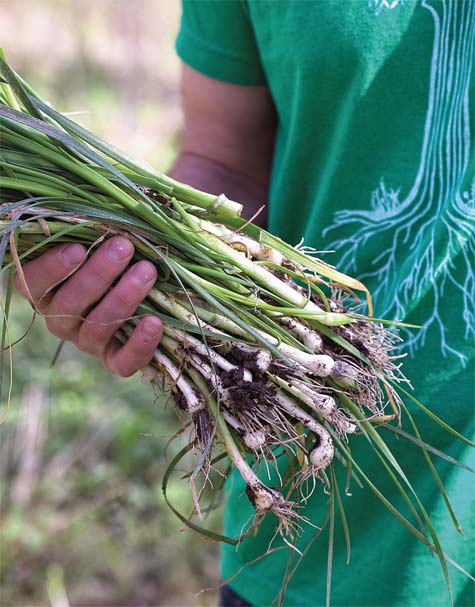 A text message from the chef advises us to wear boots. I read between the lines: expect hiking through muddy creek beds, maneuvering around fallen trees and sidestepping down slippery ravines. Foraging with FT33’s Matt McCallister, if not an extreme sport, is a workout. It’s also the best way to get to know one of Dallas’s most innovative culinary talents.

We’re headed to where the wild things grow to search for edible plants. Foraging, whether in forests, parks or your own backyard, is the act of hunting and gathering nature’s free food. That wispy weed that appears to be nothing more than a nuisance may actually be a source of nutrition. Long ago, wild greens, berries, nuts and roots provided sustenance to the indigenous tribes who roamed this area. Modern life offers shelves of food choices, but nowadays, most of us would starve if dropped alone into the wilderness. Not so for Chef McCallister, who’s made it his quest to learn about all that nature offers.

Earlier in the week, a steady rain soaked North Texas, but on the morning of our outing, the weather is flawless with clear blue skies and mild temperatures hovering in the upper 50s. As instructed, I tuck the bottoms of my jeans into waterproof rubber boots and head toward our rendezvous spot.

McCallister’s band of foragers includes members of his kitchen staff: Brady Williams, then FT33’s sous chef, cooks Cesar Murillo and Misti Norris, and from the restaurant Lucia’s kitchen, Justin Holt. Though no blindfolds are involved, there is a cloak and dagger aspect to our endeavor, and I agree to keep the specifics of the locations where we forage a secret.

Urban grower Tom Spicer of FM1410 first introduced these sites to McCallister. The chef has great respect for Spicer’s expertise, and FT33’s inventive menu is filled with items plucked from Spicer’s cultivated garden in East Dallas. McCallister talks excitedly about an upcoming mushroom hunt that he and Spicer have planned on private property near Lake Whitney. 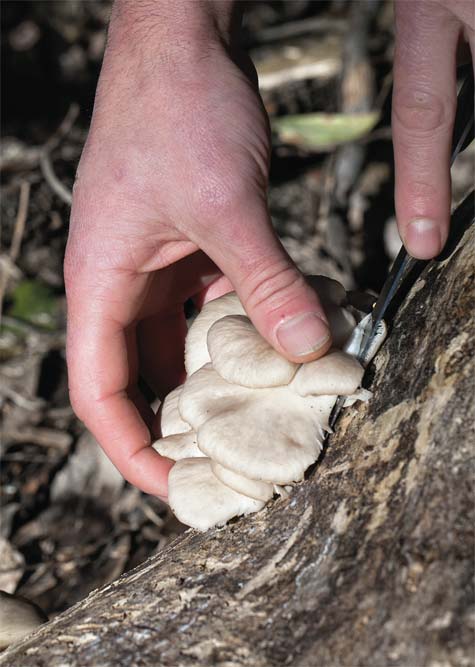 Foraging Rule #1: Do your homework, and if possible, find a mentor.

Some plants are poisonous; a few are lethal. Read about what’s in season and what wild edibles grow in your region. Depending on its stage of growth, a plant may be delicious or tasteless. Certain parts may be edible while others are not. There are nature’s laws, and then, there are man’s laws. Ask permission before walking onto private property.

The chef suggests reading Stalking the Wild Asparagus by Euell Gibbons and Identifying and Harvesting Edible and Medicinal Plants in Wild (and Not So Wild) Places by Steve Brill. For plants specific to Texas, he follows the blog of the expert regional forager Merriwether (aka Dr. Mark Vorderbruggen) of Houston.

On the day of our foraging, McCallister has a list of things he hopes to find. Hiking over a ridge, we come to the first item within a stone’s throw of our parked cars. In the gentle ripples of a shallow creek are abundant clusters of watercress. To the uninitiated like me, it’s nothing more than a green water plant. Tonight these greens will garnish several of FT33’s signature dishes. The crew reaches in and snips off large bunches with scissors. Watercress needs flowing water, McCallister tells us. It is prolific, and he assures us that this plant will regenerate in no time. 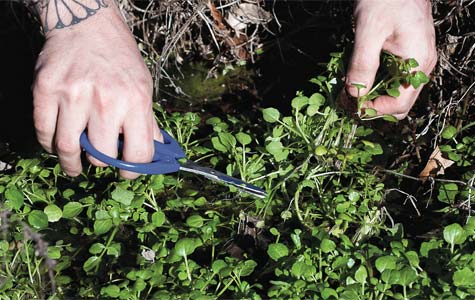 I asked McCallister if fertilizers or pesticides from nearby properties could pollute this water source. The chef believes that this spot is safe but agrees that toxins are a concern for foragers. That’s why he’s picky about where and what he picks.

“Once a friend cut some oxalis (wood sorrel) from the side of a busy highway, and I wouldn’t use it,” he says.

Foraging Rule #3: Forage in areas that are toxin free. Make sure you’re not in a runoff area for industry or agriculture. Everything that McCallister gathers is thoroughly washed in a 5% peroxide cleansing bath.

Misti stuffs the still-wet greens into a white mesh bag. Swinging the zipped bag in a centrifugal spin, she accidently flings water onto a startled Justin. McCallister enjoys taking his crew here, just as he enjoys taking his 3½-year-old daughter Ella to visit local farms. “They have fun,” he says, “and maybe they’ll pass it on.” 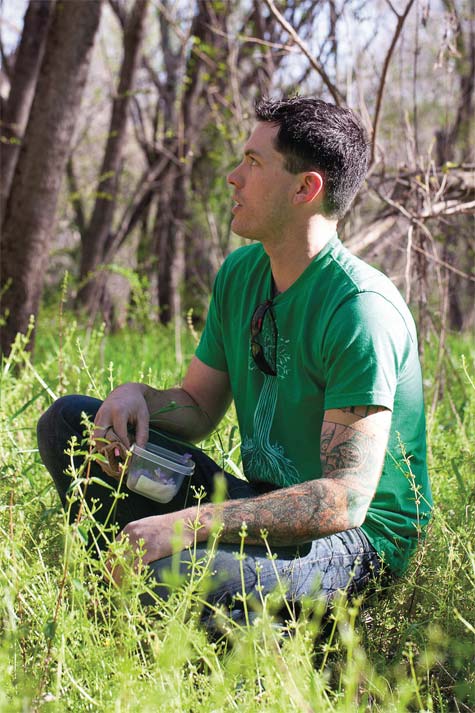 “My dad grew up poor in Indianapolis,” says the chef. “He is brilliant but uneducated about [sophisticated] foods. When I first served him morel mushrooms, he said: ‘Wow, when I was a boy, me and my dad used to pick these.’ They would collect these huge bags of the morels and make mushroom soup.”

McCallister points in the direction of a shaded pathway, and we follow. The chef is a runner and with his long legs, he takes two steps for everyone else’s one. By his own admission, he’s not much for sitting still.

“I get some of my best ideas when I’m running, chilling out with music,” he says. “Ideas for food pop into my head. I stop and email myself before I forget.” Sometimes, he stops to forage during a run. He got strange stares the day he jogged off a running trail and began pulling up spring onions.

Dappled sunlight shines through the tall trees and onto the undergrowth. McCallister points out edible henbit, chickweed and pretty young shoots of greenbriar. A former art major, he loves creatively displaying these garnishes alongside his dishes. He’s working on a cocktail recipe with muddled oxalis, which he describes as “super sour.”

As he talks, McCallister glances to the right and spots a large tree that’s fallen since his last visit. He suspects that oyster mushrooms are growing from its damp bark. Mushroom hunting is usually best shortly after a rain. We’re looking for the springy ones that are still moist like a sponge. At a recent FT33 dinner, McCallister and guest chef Randy Rucker of Houston prepared a 14-course foraged meal that included oyster mushrooms cooked on a Japanese robata grill fueled by white birch.

The entourage follows him off-trail, and sure enough, hidden in plain view, the mushrooms are growing along the downed tree’s crevices and knots. With trepidation, he reaches deep into a hollow and is rewarded with a giant-sized ’shroom. Inspecting the outer bark, we see many more, and the team pulls out knives to carefully remove them.

“You could be a (expletive deleted) and just pull them off,” he explains, “but I cut them above the base. If you leave enough, they’ll grow back from the spores that remain.” He passes on the baby mushrooms. He’ll wait until they’re bigger.

Foraging Rule #4: Protect the environment. Don’t take anything before it’s ready. Cut with clean utensils. Pick up your trash.

With several bags filled, we trudge back to our cars and drive to another location about a mile away. The chef uses his smartphone’s GPS to track the spots where he has been successful. As we hike toward an area the group has christened “Mushroom Meadow,” a hawk circles above us. When we come to a creek, McCallister gracefully balances across a log to get to the other side while the rest of us look for an alternative route that requires less finesse. With all safely across, we search out some spring onions and begin wriggling them from the wet, black earth. There are non-edible varieties, McCallister warns us. You can distinguish the edible ones by their oniony fragrance. I hold one up to my nose and take a whiff. Yes, it is unmistakably an onion.

The chef bends down to pick some nearby flowers that are a vibrant shade of purple. “I know a harvesting company that charges $15 a pound for these,” he says, putting together several large bouquets. “The leaves are good in salads.” He identifies them as edible wood violets, and they’re everywhere. Soon they’ll garnish FT 33’s chocolate desserts. 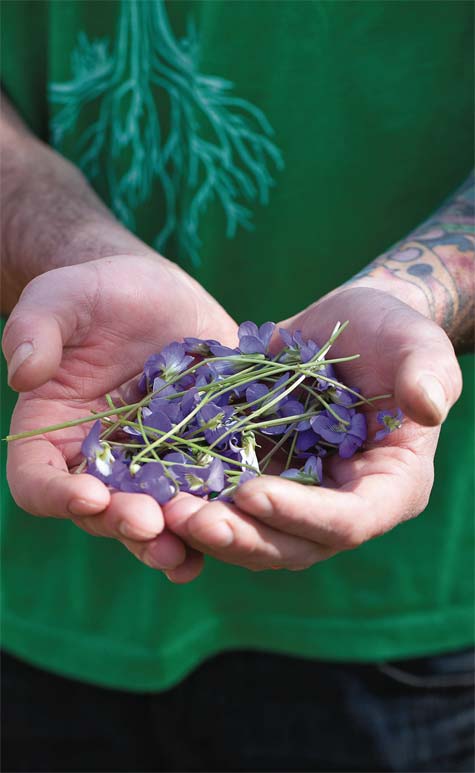 Further down the path, he points out a patch of stinging nettles. When blanched, the plant’s prickly, acidic leaves are transformed into a super food that can be used for pesto, soup or tea. Disregarding the cook-before-you-eat advice, I impulsively put a leaf into my mouth and nibble on it. Within seconds, the tip of my tongue begins to sting like crazy. I spit out the green stuff, hoping that no one is looking.

McCallister continues picking wood violets but withdraws his hand after brushing across a nettle leaf. “Man, that stuff makes my hands burn.” He’s not affected by poison ivy, he says. But stinging nettles—that’s another story.

“Have you ever gotten violently ill?” I ask him.

“You’ve got to be careful,” he says. “The sumac with red berries is good; the kind with white berries—poisonous. Water hemlock causes most foraging deaths. It’s really poisonous.”

I spit again to make sure all the nettle bits are gone.

And then there was the time one of his friends had an incident. “We were hiking on the John Muir Trail near Yosemite,” says McCallister. “About 40 miles into our hike in a high meadow, we got bored with our provisions. My friend started eating these wild berries. Not knowing what they were, I wouldn’t touch them. When he got up the next morning, half his face was swollen.”

With that, we circle back to a forager’s #1 rule: Do your homework. Be able to identify what you’re eating and what you’re brushing up against. Carry an illustrated guidebook, and when in doubt, take a photo and e-mail an expert. Have fun out there but be safe.

“Are other North Texas chefs doing this?” I ask, knocking a clump of mud from my boots and checking my tongue for swelling.

“Not that I know of,” McCallister answers, as he gathers more violets. “Maybe they don’t realize how easy it is.”

KID’S CORNER: GETTING HOOKED ON FISHING
SUMMER RECIPES: IN THE RAW: IT’S A PICNIC