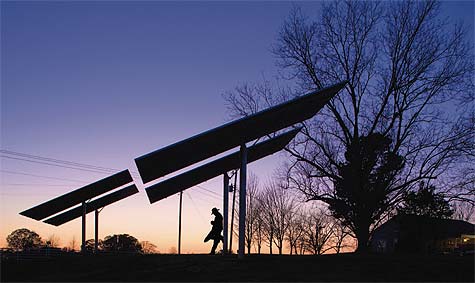 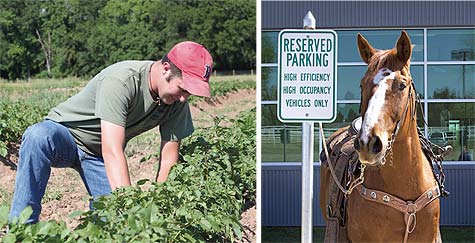 The narrow farm road twists and turns before cresting on a small hill where the horizon opens up onto a mirage-like scene. In a distant field, what appears to be a giant, twirling pinwheel spins in the breeze like the toy of a playful child. Nearby, oversized sun-catchers sprout up in gleaming rows like newly planted corn.

“I can only imagine what people think when they drive by,” said agriculture student Michael Rundle. “Their first reaction is probably ‘What in the world is that?’ It’s the most unbelievable thing you’ve ever seen on a community college campus.”

The “thing” which Rundle refers to is a state-of-the-art, energy-saving facility with 25 solar panels, a rainwater harvesting pond and its own wind turbine. And no, the structure is not sitting in sunny California or somewhere in the Pacific Northwest. It is right here in Northeast Texas in the middle of a cow pasture.

The Elizabeth Hoggatt Whatley Agriculture Complex, located on the Northeast Texas Community College (NTCC) campus just outside of Mount Pleasant, was more than ten years in the planning. The innovative 21,000-square-foot complex, designed by Fort Worth-based VLK Architects, has gained Platinum LEED®certification from the U.S. Green Building Council, placing it among a select few structures worldwide that have earned this elite distinction. The NTCC agriculture program is using this high-tech complex and the college’s 250-acre farm to get in on the ground floor of what NTCC President Dr. Brad Johnson calls “a resurgence in Texas agriculture and an increased interest in sustainable farming.”

Johnson said NTCC’s program is bringing together a mixture of traditional techniques and modern science to help the rural farmer become economically viable in today’s market. The president added that the new complex is much more than just a place to get a college degree. “We are using a creative approach to encourage the development of a community of shared interest that will serve individuals in many different ways.”

But what really makes NTCC’s program unique is the fact that students can step out of the back door of the modern building right into the middle of a hands-on small farming operation. Students enrolled in credited, certificate or continuing education classes immediately take on the role of farmers in the Eagle Eye Demonstration Garden. Named after the college’s mascot, the plot of land offers students the opportunity to gain an array of farming experience. The area includes a community supported agriculture (CSA) garden, a vineyard, a blueberry and blackberry patch and a cut flower and herb garden.

The methods used in the garden focus on a sustainable agriculture system, which uses the least amount of artificial input to create a product. Along with the standard transferrable agriculture degree, the college also offers an Associate of Applied Science degree in Sustainable Agriculture as well as a variety of certificate and continuing education classes geared toward small farming. Michael Rundle and fellow student Jace Gibson are among the host of students being given the opportunity to apply what they learn on the working farm. Gibson, who loves farming so much he wrote his English research paper on growing tomatoes, said NTCC’s approach is exactly what he was looking for in an agriculture program.

“You can actually feel the dirt in your hands, and the only thing I like better than freshly tilled dirt is women,” Gibson said with a grin. Although the two are headed down different academic paths—Rundle plans on majoring in wildlife management, while Gibson is working on a degree in horticulture—both students are reaping the benefits of NTCC’s teaching methods.

Rundle, who recently moved to Northeast Texas from Oregon, is using the courses at the college to return to the farming roots he inherited from his own family. “I look at the simpler lifestyle of my grandparents and what they did, and how they did it, and I have a great deal of respect for them,” he said. “I want my kids to have that knowledge and know how to take care of themselves and provide for their families.”

NTCC Assistant Professor of Sustainable Agriculture Chris Oefinger noted that everyone from kindergartners to octogenarians wants to learn, and the school’s distinctive program is attracting a diverse group of students. One recent small farming class included a 66-year-old retired merchant marine who inherited his family’s farm and a 17-year-old who wants to own his own produce stand.

“We have fewer and fewer community members who have ever been involved in agriculture,” Oefinger said. “Our programs help them learn how to grow food and understand where it comes from. Our lab is hands-on. We’re outside working in the dirt.”

Donald Veasley, a NTCC culinary arts student, said he took the class to learn how to grow vegetables for the soul food restaurant he hopes to someday own. “Food makes people happy,” Veasley said. “Good produce and good food—I can’t lose with that.”

NTCC Director of Agriculture Dr. Charlie Apter, who has been involved with everything from the architectural planning of the building to the design of the course curriculum, said his vision for the program is that “it will help foster economic development in Northeast Texas and become a driving force for the development of rural-based agriculture business.”

As a way to both encourage and educate those interested in sustainable agriculture, NTCC recently held its first annual “Living From the Ground Up” Small Farms Expo. Almost 500 people visited the agriculture complex during the three-day event, which included a ribbon-cutting ceremony, educational sessions on farming and an open house. A variety of experts led breakout sessions on everything from CSA gardens, wineries and truck farming to agritourism, herb growing and grass-fed beef. The keynote speaker for the event was Howard Garrett, better known to radio audiences as The Dirt Doctor.

James and Rebecca D’Angelo recently moved to the Northeast Texas area from California. The couple said they attended the event to gather some much-needed skills to help them run their 100-acre farm.

“You can’t ever get too much knowledge,” Mr. D’Angelo said. “What you’re learning here is stuff that used to be passed down by families but is now getting lost.”

“We want to diversify and learn everything we can about farming and agriculture,” Mrs. D’Angelo added. “The college is now offering a way we can do that.”

Sid Greer, a member of the NTCC Board of Trustees for 11 years and owner of Greer Farms, has been a steady advocate for the expansion of NTCC’s agriculture program. Greer, who spoke on agritourism at the expo, said that one of the college’s goals is to help people learn ways to use their small acreage to make a living or supplement their income.

“There’s an insatiable demand for the products we can grow locally,” he said.

Both Apter and Greer said the early success they have experienced is only the beginning of what the college has planned for its ag program. In Summer 2012, individuals who enroll in continuing education classes will have the opportunity, at a reasonable fee, to stay on campus in the new dormitory apartments that are currently under construction.

Greer said another goal of the program is to construct a co-op building on campus that would give area farmers a place to bring their crops for sale to local consumers.

“We’re just on the first step,” Greer said. “When we fully reach maturity, we are going to be able to provide a resource in our area that will have an economic impact. We want our program to be recognized nationally as the preeminent sustainable agriculture program in the mid-south.”

Thanks to this innovative new agriculture complex, it won’t be long before FM 1735, the rural road that leads to the NTCC campus, is once again used as a farm-to-market route for a whole new breed of farmers. www.ntcc.edu 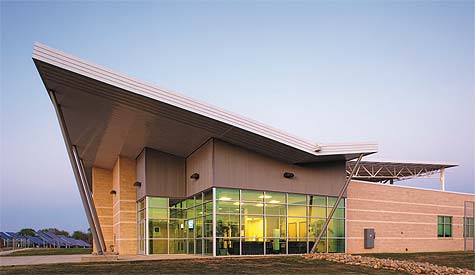 “I can only imagine what people think when they drive by,” said agriculture student Michael Rundle. “Their first reaction is probably ‘What in the world is that?’ It’s the most unbelievable thing you’ve ever seen on a community college campus.”