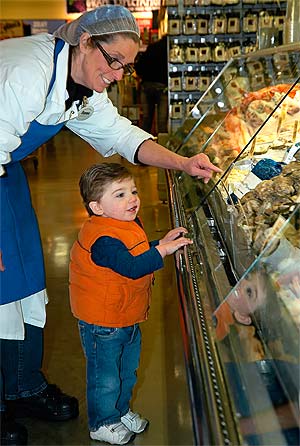 Sixteen months ago, I was a brand new mom at age 39. Fearful of everything new moms fear, I found that the one thing that didn’t scare me was feeding my son Ben. As a registered dietitian and self-proclaimed foodie, I knew the who, what, where, when and whys of “proper” feeding and how to find the resources I needed to assist me throughout the process. Feeding children can be an overwhelming and daunting task. Feeding Ben, though not without a few challenges, has been, for the most part, fairly easy.

My first challenge was breastfeeding, for which I developed a love-hate relationship. I wanted to breastfeed and prepared for it before Ben’s arrival. There was no denying its benefits. Good nutrition for growth and immunity were critical to me as was the bonding aspect of the process. I had all of the contraptions at home and was to begin my tenure as a lactating mommy.

Fast forward to Ben’s one-month birthday. I had fed, pumped, popped Fenugreek seed, pumped, drank beer, pumped and visited with two lactation consultants—all to no avail. No milk! Realizing that my job was to feed my baby first, I made the switch to 100% formula, and he thrived. I never looked back.

Our pediatrician said “When he starts lunging towards your food, it’s a sure sign he’s ready to start real food.” I took my cue and out came the rice cereal when Ben made his move. Soon after, we graduated to peas, carrots, green beans and applesauce. I used a mix of homemade and jarred organic baby foods. It made me feel happy and motherly to make Ben’s food and frankly, I was surprised at how easy it was to make a pureed batch of the good stuff. In reality, the only tools needed were a microwave and an immersion blender. Ingredients? Fresh or frozen fruits, vegetables and water. Freezing small (two, three or four ounce) portions in plasticware made life easier. Also, there was no need to purchase an expensive baby food maker.

Ben made his inaugural visit to the Dallas Farmers Market when he was five months old. We rambled up and down the aisles of the various sheds, stopping often to smell the herbs, feel the baskets of fruits and vegetables and marvel at all of the colors. It’s critical to remember that kids—and adults—eat with all of their senses. We see, hear, touch and smell our food well before we taste it. Think about it. We see a red bell pepper. We hear the crunch of the pepper when we bite into one. We smell the sweetness of a pepper and we feel the outside skin of the pepper. My goal was to encourage the appreciation of food and ingredients from an early age—something that I was unable to do until adulthood.

Cinnamon in oatmeal. Vanilla in yogurt. Bay leaf in lentils. Basil in marinara sauce. Refusing to become a short order cook, I began to give Ben the deconstructed versions of the same foods we ate. Our Caprese salad became tomatoes, mozzarella and avocado for Ben. Our turkey lasagna became, well, turkey lasagna in miniature form. We pulled his chair up to the table with us and started family dinners. Creating happy food memories was our goal.

Trips to different markets and grocery stores were routine activities for us, and we quickly became friends with the fishmonger at Central Market in Plano. Each Tuesday morning, Ben and I would select a fish for dinner that evening. Often, we would pick out a mild, white fish in order to satisfy everyone in the family. Seasoned simply with a touch of olive oil, salt and pepper, I would bake it and then drizzle lemon juice over the fish. Ben ate nearly an adult portion of fish each time I made it for dinner. Exposure—from start to finish—is critical in raising a healthy eater.

“How do we know if he’s eating too much?” my husband would ask. My answer: “He’ll stop eating when he’s full.”

It was important to teach Ben and those who were responsible for feeding him how to honor his hunger. When he stopped eating, threw food on the floor or started dawdling, the meal was over. Impressing this fact on him was a cinch. It was the others around him that were tough to convince. Food is not love. Love is love. Both my husband and myself grew up in homes where the two were confused at times.

When Ben was nine months old, he ate a pickle. He devoured it, and those who saw him stared—and then laughed—in disbelief. At 12 months, he was eating nearly everything he was offered. I roasted vegetables, scooped out spaghetti squash and made our take-out leftovers into his meals. By 12 months, Ben was an aficionado of Italian, Mediterranean, Mexican and some Asian foods.

Today, sautéed spinach, roasted cauliflower, fish and a never-ending supply of black beans are routine staples on Ben’s highchair tray. He will wail if I try to take a spoon or fork away from him as if to say, “I’ll do it myself!” I’m sure those words and more independent behavior are not too far away. He heads to the fridge when he’s thirsty, and an audible “Muh? Muh?” is heard throughout the house.

We routinely cook together in the kitchen. He has his two cabinets full of his equipment: a child-sized cutting board, mini jars of spices (unopened), plastic measuring spoons, a whisk and a large soup pot. Ben is a master at stirring and likes to blow on everything to cool it down before eating, regardless of the actual temperature.

Cake, cookies and sweets? Of course. On occasion, but not as an everyday occurrence. Snacks to keep the whining and crying at bay? Ninety-five percent of the time I do not pacify him with food, but I see how easy it could be to fall into that trap. Redirecting him is a skill we practice faithfully. Hopefully, our efforts will translate into Ben finding things other than food to soothe himself when he’s bored, angry, frustrated or even happy.

While I’m not naïve to the possibility of food rebellion as Ben ages, my hope is that the foundation for appreciation of good, wholesome food is ingrained somewhere in his brain. His cabinets, cutting boards, measuring spoons and jars of spices will always be waiting for him.