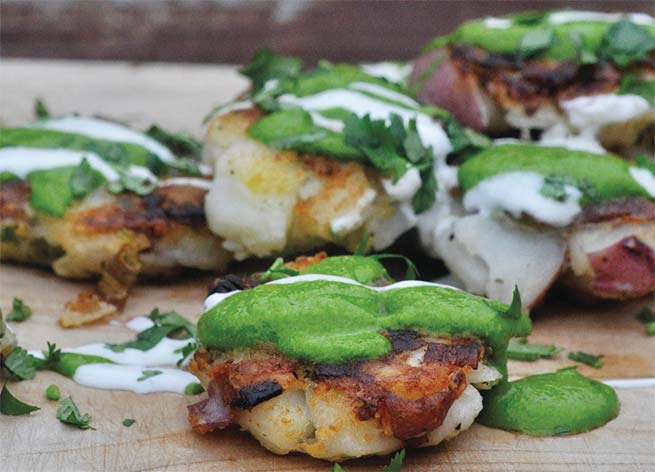 Scrub the potatoes and slice them into 1-inch chunks. Put them in a large stockpot, cover with water by 3 inches, and add a bit of salt. Cover and cook over medium-high heat until it boils, reduce the heat and let the potatoes cook until you can just pierce them with a fork—you don’t want them too soft. Let them drain in a colander.

While the potatoes are cooking, slice the leeks lengthwise, then crosswise into pieces, and rinse them well. Dry them off and put them in a large skillet over medium heat with 2 tablespoons olive oil and salt and pepper to taste. Cook until the leeks soften, then remove them from the skillet and let them cool in a bowl.

Save Time: Do the first 2 steps in advance and refrigerate.

Toss the chunky potatoes into a large bowl with the leeks and the chopped jalapeño and flour. Taste for seasonings and add as much salt and pepper as it needs. Using an ice cream scoop, form small patties and lay them out on a large baking sheet. You should have about 30.

Put just enough canola oil in a large skillet to cover the bottom. Turn the heat to medium and when it’s hot (you’ll know because the potatoes will sizzle when you put them in), add as many galettes as will fit.

Cook on both sides until brown, about 6 or 7 minutes total. Remove and place on a paper towel-lined baking sheet. Repeat with the rest of the galettes, adding oil as needed.

While the galettes are cooking, make your sauces. Put the cilantro, canola, shallot and lime juice into your blender or food processor and purée until smooth. Taste for seasonings. In a medium bowl, whisk together the yogurt, small pinch of salt and as much water as needed for an easily pourable consistency.

Serve the galettes on a large platter and drizzle with both sauces.