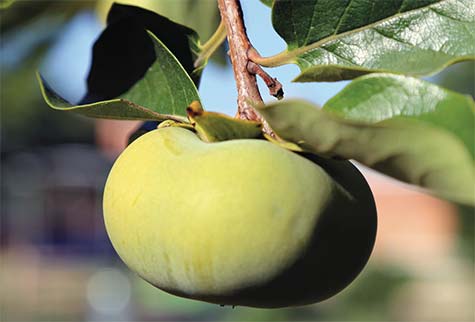 To paraphrase that sage philosopher Mick Jaggar—you can’t always get what you want. Just try sometime to find ripe persimmons in July. For decades, I hadn’t cared one iota about persimmons. Now, I was obsessed. “Certainly they’re ripe somewhere in the world,” I said, as food photographer Joy Zhang and I combed stores, local Asian markets and the Internet. To satisfy deadlines, we needed six persimmons for cooking our featured fall recipes—persimmon pudding, couscous-persimmon salad and prosciutto-wrapped persimmons. Though the result of Joy’s photography looks delicious, she had to make do with pears and oranges. Mother Nature—not Edible DFW—decides when persimmons are at their best.

Why was I not aware of this fall treasure, I wondered, when my neighbor Shirley pointed to her 23-year-old persimmon tree, hugging our alley’s fence line. Its tall branches were laden with fruit, still months away from being edible. For more than twenty autumns, these sticky sweet, orange-toned beauties had been within arm’s reach, and yet, I had never noticed. Now they taunted me with their immature green sheen and hard-as-nails firmness.

Don’t let this happen to you. Within these pages is a primer on persimmons written by journalist-gardener Marshall Hinsley. Heed his advice and don’t let the season slip away without discovering this underappreciated delicacy.

At Dallas’ Temple Emanu-El, tiny preschoolers are being taught to appreciate nature’s many gift s, thanks to their Garden of Peace program and its coordinator Heidi Kutchin. Writer/photographer Kelly Yandell tells the affirming story of the congregation’s Early Childhood Education Center and its loft y mission to create future citizens, mindful of their responsibility to nurture the planet.

A good steward of the environment, gardener Chris Taylor has perfected the alchemy of composting. Writer Eve Hill-Agnus and photographer Lauren McClure accompanied Taylor as he delivered the harvest from his thriving garden to acclaimed restaurants Oak and FT 33. His story is unique because he completes the cycle by composting their kitchen scraps: from kitchen to garden and back again.

Two farms are profiled in this issue. Writer-photographer duo Penny Taylor Ruekberg and Melinda Ortley visited with farmer Paul Magedson whose Good Earth Organic Farm is one of only several Certified Organic farms in North Texas.

Writer Kim Pierce and photographer Desiree Espada traveled to northeast Texas to meet Comeback Creek Farm’s John and Aliza Kilburn, whose produce is coveted by many a powerhouse chef. A past diagnosis of Stage 4 lymphoma caused John to make life-affirming changes—changes which led him to farming, which in turn led him to Aliza. Theirs is a remarkable story of survival and renewal.

And on the subject of renewal, if you haven’t ventured down Lower Greenville lately, shuffle over with our top-notch guide by Teresa Gubbins. Included in her story are photos of local luminaries by Karen McCullough.

Nanci and I would like to extend our best wishes to the Kurry King’s Paula and Jody Rikhilal and family, who will be closing their 20-year-old business, founded by family patriarch Ben, who passed away in 2012. You are loved and will be missed