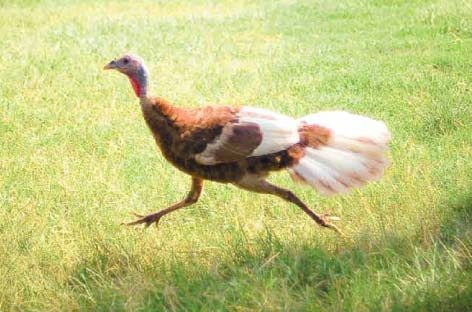 In the new book Twain’s Feast, food writer Andrew Beahrs follows in the footsteps of one of America’s most beloved authors. Mark Twain paused during a European tour in the winter of 1878 to compose a fantasy menu of the American dishes he missed most. Each was intimately connected to a cherished memory.

As a boy, Twain often went hunting with his cousins and his Uncle John (Quarles), stalking squirrels, geese and deer in the forest and prairies beyond the farm. Perhaps their favorite quarry were the wild turkey that gathered at dawn in great flocks; Quarles, Twain later remembered, imitated a turkey call “by sucking the air through the leg bone of a turkey which had previously answered a call like that and lived only just long enough to regret it.”

He himself wasn’t nearly as wily a hunter. Once, lugging a massive shotgun, he followed an “ostensibly lame turkey over a considerable part of the United States’” because he “believed in her and could not think she would deceive a mere boy, and one who was trusting her and considering her honest.” Having lured him miles from her brood, she flew off into the woods. Twain was humiliated—and lost—but as he searched for his uncle and cousins, he came across an abandoned log cabin.

The old, weedy garden was full of perfectly ripe tomatoes. “I ate them ravenously,” he wrote, “though I had never liked them before. Not more than two or three times since have I tasted anything that was so delicious as those tomatoes.” He gorged until even the sight of a tomato was too much for him; still, he had the turkey to thank for what he remembered as “one of the best meals that there in my life-days I have eaten.”

Twain hunted wild turkey and came back with tomatoes; he went into the woods and found a garden. Writing his menu, he’d make a show of wanting all his favorite foods assembled from the corners of the United States. But if that angel could actually appear with steak and biscuits, with roast turkey and Tahoe trout and New Orleans croakers, each might lose something essential— the inborn qualities that fixed them on the land, and in Twain’s life and memory. Sometimes it’s good not to get exactly what you want, whenever you want it; sometimes it’s better to be open to what a season has to offer, to celebrate what’s already there.