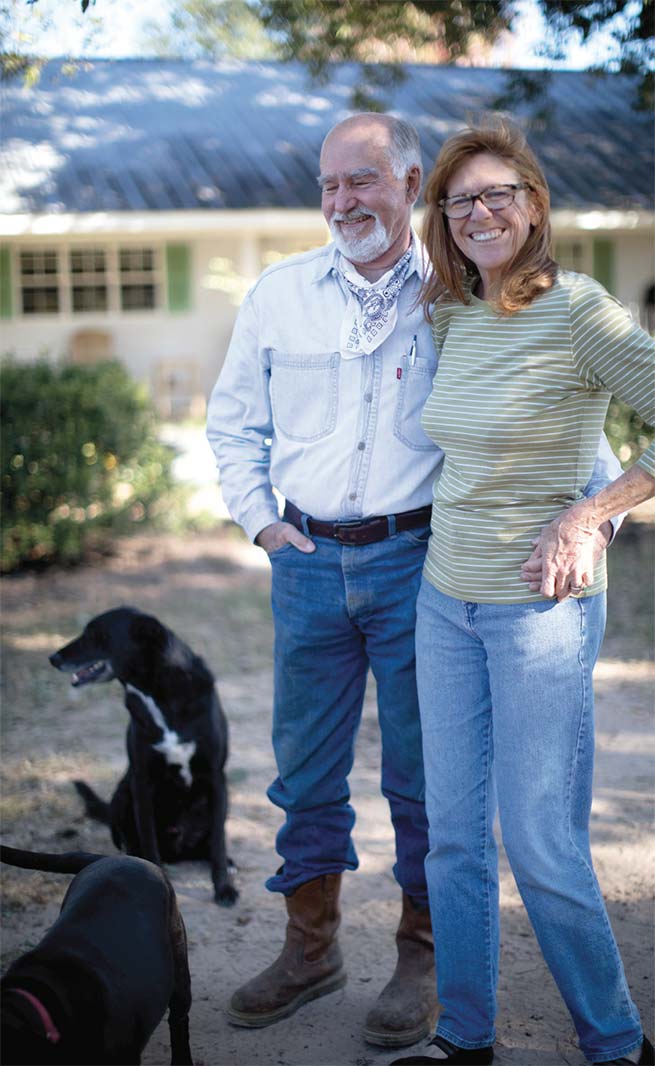 “I didn’t want a dog,” says Nancy Falster, recalling how it all began. “But Karl insisted I needed one.”

Nancy and Karl own Falster Farm and Cattle Ranch in Wood County near Winnsboro, where they raise organic vegetables, freerange chicken and grass-fed cattle.

The farm dog in question is the Falsters’ lab-mix Stuart, the subject of a newly released children’s book written by Nancy and illustrated by her daughter, Molly Nichols. Another daughter, Bonnie Grubbs, a reading specialist, helped with editing.

Now an indispensable part of the Falster clan, Stuart could have just as easily been another sad statistic. On a chilly night seven years ago, he was part of a litter of puppies dumped and left to fend for themselves in a dark East Texas woods. It was Stuart’s good fortune that Karl and his friend, Glenn Hartman, took a turn down a gravel road and saw the pups, scared and hungry. They loaded the four canine brothers and their sister into the back of their pickup, brought them home, and the rest is history.

He may not have been what she wanted, but Stuart was definitely what Nancy needed.

Stuart finds a Home is the first in the series of books Nancy has planned, each a different episode in Stuart’s journey from abandonment to a life filled with love and purpose.

Soon after arriving, Stuart separated himself from the pack, shadowing Nancy and watching her in the kitchen. When it came time for each pup to go to their fur-ever homes, Stuart made it clear that he’d already found his.

The Falsters admit they don’t know what they’d do without him.

“Karl depends on him. He’s our night watchman,” says Nancy. “And a lovebug, too.”

He’s not a herder like Willie, their border collie, and he doesn’t patrol the perimeter like a Great Pyrenees might. But Stuart’s keen instincts are invaluable on a property where there’s no shortage of invading critters with malicious intent. A possum in the grape arbor.

Snakes near the henhouse. Wild hogs in the corn field and kitchen garden. Coyotes, racoons, moles and mice. It’s never-ending.

Stuart, his nose sniffing the air, keeps a lookout each night from his perch on the porch, or in the winter, his bed in the garage. A special bark lets Karl know the severity of the situation. There’s a swagger to Stuart’s step when he’s done a good job.

Nancy began writing the story as a gift for the Falsters’ young grandchildren. Daughter Molly and her husband Dustin have three biological children and were foster parents to five more in just over two years, one of whom they recently adopted. Nancy plans to address the topic of adoption in a future book.

Stuart finds a Home is the first in the series of books Nancy has planned, each a different episode in Stuart’s journey from abandonment to a life filled with love and purpose.

With Stuart as a shining example, Nancy wants to encourage everyone to live their best lives.

And to teach responsibility. “Let’s educate children and their parents about being responsible pet owners,” she says. According to Animal Preservation of East Texas, Wood County has one of the highest rates of abandoned dogs and cats in the state. The Falsters’ veterinarian estimates that between 300 to 600 dogs and puppies are dumped in Wood and surrounding counties each month. “Animals should be spayed and neutered,” says Nancy. “We need to shut down puppy mills.”

And when the opportunity presents itself, give shelter to an animal in need.

Nancy’s dreams are big.  e Falsters hope to strike up a partnership soon with a national retail chain that will sell their books and help them expand. Nancy’s writing a cookbook for kids and dogs to share, perfecting organic dog snacks and working on new story ideas. She is having the book translated into five languages.

Now a mature 7-year-old, Stuart also has a lot in his dog bowl. Besides his watchdog duties, he has been certified as a therapy dog and has visited nursing facilities and schools. “We want him to be prepared to do other things when his patrolling days are done,” says Nancy.

Stuart is teaching a new recruit to swim. An 18-month-old named Dillon. Another lucky dog with big paw prints to fill.

Go to farmdogstuart.com to buy your pawtographed copy of the book. To learn more about Falster Farm: falsterfarm.com and onpasture365.com.

4 Responses to Stuart Finds a Home

Drop off your compost this week at one of these TURN locations! Turn #composting #Sustainable #bethechangeCelebrate this final week of September by composting with Turn at one of these drop-off locations! Thank you to all of our local hosts and partners. Check out all the goods they have to offer while you are out and about ♻️ ... See MoreSee Less