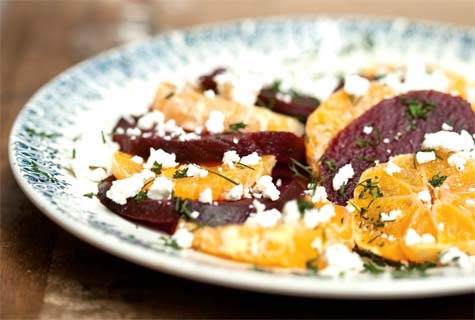 From COWGIRL CHEF: TEXAS COOKING WITH A FRENCH ACCENT
by Ellise Pierce

“Eat beets? Those awful-looking things that taste like dirt? No way.” That’s what Cowgirl Chef Ellise Pierce would tell her mother every time she cooked beets. “When I was growing up, my mom was always making pickled beets,” says the Texas-raised, Paris-based food writer. “The smell was so off-putting that I couldn’t imagine eating them.” And, for a very long time, she didn’t. Fittingly, Paris was the place where she became enamoured with them. It happened, as love often does, completely by accident.

“I ordered a trio of salads for lunch at Rose Bakery in Montmartre. A beet salad ended up on my plate, and I decided to give them another try.” Since then, she’s learned that beets go with just about everything. Their sweetness and earthiness is a subtle contrast to so many things, like bright and juicy oranges.

Trim the ends off the beets, give them a good rinse and dry and wrap them up with heavy-duty foil. Put beets on a cookie sheet and slide them into the oven for an hour, depending on the their size. To check doneness, carefully take them out of the oven, unwrap the foil and slide a dinner knife into the beet. (It’s done if it easily cuts through the beet.) When they’re done, let them completely cool in the foil before slicing—and whatever you do, don’t wear white.

Cut the whole, peeled orange right across the tummy (horizontally) into slices about ½-inch thick so the slices resemble flowers. Cut the cooled beets the same thickness, and layer them across a serving plate, fanning them as you do so. Drizzle a little E-Z French Vinaigrette over the top and sprinkle with some feta and fresh dill.

Put vinegar, shallot, mustard, a big pinch of salt and pepper and herbs in a jar and shake, shake, shake. Let rest for about 10 minutes—this softens the intensity of the shallot’s flavor and allows salt to dissolve. Now, add olive oil and shake again. Taste for seasonings.