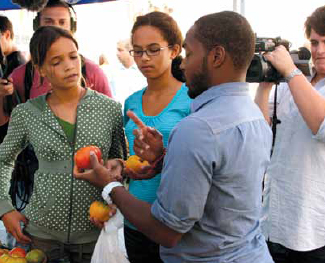 Which burns faster: a marshmallow, a walnut or a Funyun? And why should anyone care? Oh yeah, and what the heck is a Funyun?

In their delightful film What’s On Your Plate?, Sadie and Safiyah, two inquisitive tweens from New York City, set out on a year-long quest to find simple answers to big food questions. Where does our food come from? What’s good for us to eat? Why is there food that’s not good for us?

Sixth graders Sadie Hope-Gund and Safiyah Riddle have been best friends since the fourth grade. They both have little brothers and infectious giggles. The idea for their film was planted while the girls were visiting Sadie’s extended family in rural Ohio. One night as they made the evening salad, they tasted some AMAZING cherry tomatoes. Sadie’s mom asked, “Do you want to meet the farmer who grew them?” I recently spoke with the budding young activists and found out more about the girls behind the film.

TT: Those tomatoes you tasted on your vacation sounded yummy. How were they different from the ones you’d eaten in the past?

Sadie: They were fresh. The real deal. Straight from the farm.

Safiyah: And we got to meet the farmer and pick more.

TT: Have either of you seen Jamie Oliver’s Food Revolution on television?

Sadie: No, my mom told me about it though. We should watch it online.

Safiyah: They haven’t been exposed to fresh foods or farms.

TT: I read somewhere that you considered making a film about “bad” vegetarians. My son was one of those. He didn’t eat meat but he didn’t eat vegetables either.

TT: You were born into a family of vegetarians, Safiyah, and have remained a vegetarian. Sadie, do you eat meat?

Sadie: No, I’ve been a vegetarian since fourth grade.

Safiyah (laughing): Yeah, she wanted to be more like me.

TT: You discovered when you were younger, Sadie, that you had high cholesterol, a genetically linked condition in your case. It’s fortunate that you found out early and got it under control.

Sadie: Yes, it’s good now. My family eats really healthy. No red meat, but I’m the one who eats tofu. Living in the city, we walk a lot.

TT: What do you eat for lunch?

Sadie: I like leftovers. Whatever my mom made the night before. Sometimes soup in a thermos.

TT: The quality of food in your public schools seems fairly good.  At least the administration is trying. I’d like to return to my kids’ old schools and check out the state of things. Hopefully, the Coke machines are gone.

Sadie: Well, our school food still isn’t that appealing. I think they moved the salad bar into the kitchen. No one can find it.

Safiyah: When the choice is between Snapple and milk, sometimes there’s this little voice that says, “Take the sugary Snapple.” Kids make their own decisions about what they eat when they aren’t at home.

Sadie: But we didn’t want our film to be preachy. Kids get preached to enough as it is.

TT: In the film, you spend time at farmers’ markets and with farmers like the Angel Family. Was it more fun to plant or harvest?

Safiyah: Digging up the carrots was the most fun. You pull out this bright orange thing that’s been hiding underground and it’s delicious.

Sadie: I wish all kids had that opportunity. The Angels have their own CSA now. We belong to it.

TT: I liked your food burning experiment in Mr. Carpenter’s science class. It really illustrated the point about empty calories. A walnut burns longer and gives you more energy than a marshmallow or, heaven forbid, a Funyun.

Sadie: Some things satisfy your hunger but don’t give you fuel. You might drink an energy drink then crash an hour later and crave something else.

TT: Anna Lappé tries to explain why food companies feel the need to slice, dice, smush, fry up and put additives into foods that are already perfect right out of the ground.

Sadie: She’s so smart. There are too many things with high-fructose corn syrup in their ingredients.

TT: What foods do you have a hard time resisting?

Sadie: Our school is near Chinatown. There are vendors with Fried Rice. . .

Safiyah: And Lo Mein. And Bubble Tea that’s delicious. It’s kind of like a smoothie.

TT: What advice would you give to kids who are trying to be healthier?

Safiyah: Just take little steps. You don’t have to do it all in a day.

Sadie: Most people give up because they try to change everything too fast.

TT: In your music video with Nona Hendryx, you walk down the streets of New York wearing fruit and vegetable costumes. Was that fun or embarrassing?

Sadie and Safiyah (in unison, laughing): Both!

Sadie: We were in Safiyah’s neighborhood, thank goodness.

TT: (A few questions for Sadie’s mom.) Congratulations on a charming movie, Catherine. There aren’t a lot of upbeat films about food these days.

Catherine: Thanks. We hope it empowers kids and their parents and encourages them to ask questions.

TT: As a working mom of four, I’m sure it’s not always easy making healthy choices.

Catherine: There are plenty of temptations in New York. Fast food is on every street corner, but we make a point of eating together six nights a week.

TT: How did you become involved with Chipotle Mexican Grill restaurants?

Catherine: I was looking for a place to film Safiyah’s family, who are vegetarians. We decided on Chipotle because there were choices for them there. I came to realize that Chipotle was walking the walk. Most of their meat is naturally raised, without hormones and antibiotics.  They recycle. I like the build-your-own concept. That’s how we eat at home. They provided food at some of our shoots and screenings. Now they’re going to sponsor some screenings. They’ve been great.

TT: Your movie will be available for families to purchase or rent in September?

Catherine: Yes, I’m working on a guidebook that will have recipes and suggestions for families. There’s a school curriculum guide on our website. We want our film to be accessible and fun.

In April, What’s On Your Plate? was shown in Austin, Dallas and Houston as a part of the Whole Food Markets’ film series Let’s Retake Our Plates. In September, the What’s On Your Plate? DVD will be available through video rental companies, on Amazon and in libraries. Chipotle Mexican Grill will sponsor additional screenings during the year in schools and community centers throughout the country. www.whatsonyourplateproject.org/