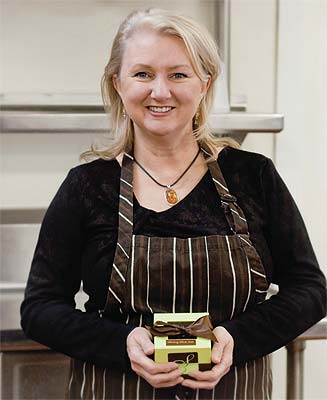 Story and Photo By Lauren McClure

Peruse a stack of popular magazine covers and you’ll likely find at least one headline declaring that chocolate is good for you and not a substance intended solely for shame eating. Even medical literature has indicated that moderate consumption of dark chocolate can have cardiovascular benefits such as aiding in hypertension and lowering of blood pressure. But before you get elbow-deep in that old bag of Halloween candy, hear this: moderation and quality are key. While moderation is obviously within the hands of the consumer, Dr. Sue’s Chocolate has made the quality part easy.

Most days of the week, Dr. Sue Williams is an internal medicine physician at Baylor University Medical Center in Dallas. But in those elusive moments outside the hospital, she has turned her passion for making handcrafted chocolates into a growing artisanal enterprise. Even through her busy medical career, Williams indulged family and friends with her homemade confections. But in 2009, wanting to learn more about the art of the craft, she headed to Chicago to take classes at the Barry Callebaut Chocolate Academy. Today, Dr. Sue’s elegantly packaged creations have North Texas chocolate lovers swooning.

She has happy memories of making candy with her mother at their family farm outside of Abilene, where she spent her youth showing horses and participating in 4-H. After graduating from Texas Tech University with a degree in agriculture, she sought a career that would allow her to work with farmers and ranchers, but opportunities were scarce. “I went to medical school because I couldn’t get a job as a county extension agent,” laughs Williams “You know, it was one of those ‘when life hands you lemons’ situations.”

Williams has honed her simple recipes into decadent products with quality ingredients. There’s no refined white sugar or high-fructose corn syrup. “You get a rich, indulgent flavor that makes you feel satisfied without having to consume a large number of calories,” says Williams. The result is finely crafted dark chocolate barks, orangettes, truffles, mendiants and cookies, all of which are made of all-natural (and in most cases, organic and local) ingredients.The short but mighty list includes good-for-you foods from nature like figs, cherries, pecans, ancho chiles and dark chocolate.

Passionate about supporting local growers and dairy producers, she shops a variety of farmers markets. She uses local honey from the Texas Honeybee Guild, cajeta (caramel milk spread) from Three Happy Cows, and organic citrus from G&S Groves in the Rio Grande Valley. “We’ve met so many wonderful people in the North Texas agricultural and food communities,” says Williams, who is a member of the Dallas Farmers Market Friends. “And I look forward to adding even more local resources in the future.”

Dr. Sue’s Chocolate is available at Bolsa Mercado, Eatzi’s, Paper & Chocolate in Dallas, and at Central Market in both Dallas and Fort Worth, at Local Yocal in McKinney, and for delivery through Greenling.com. 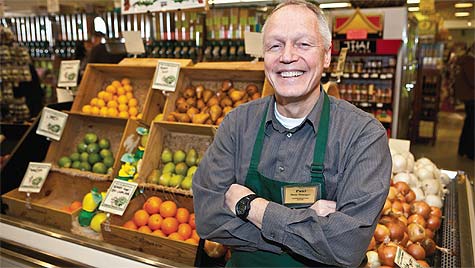 Got a craving for a rice-crust pizza, a shot of wheatgrass or a gluten free donut? Maybe you’re not sure what the heck St. John’s Wort is or why you should even consider eating grass-fed buffalo meat. There’s a good chance you’ll find these healthy options and get answers to your nutritional questions too at the Cupboard Natural Foods and Café, a few blocks north of Denton’s downtown square.

“We like to think of ourselves as the place to go for fresh, local, organically grown and sustainably harvested food,” says Paul Tanis, general manager. You won’t find products with artificial colors and flavors or preservatives at the Cupboard. Instead, the aisles are stocked with minimally processed foods, organics and environmentally friendly products. Those looking to buy local can purchase fresh eggs, pesticide- free produce and grass-fed meats and poultry from area farmers, and eating healthy is that much easier with the convenience of the fresh salad and soup bar and a breakfast and all-day lunch café.

“We [are] a part of the community and help serve that community,” Tanis says, adding that the Cupboard is open seven days a week and has been in business for over 40 years. That community is young, old and in between and includes those with health issues and dietary restrictions, he says. “One of our number one jobs here is to be available to answer questions, educate customers, [and] help them to make educated choices.”

“The nice thing about Denton is that we’ve got two universities here, and we’re right in the middle of both of them,” Tanis says. With a large university population comes a lot of diversity, transients and people who are seeking, looking for their place, he says. “And often times, we’re one of their stops.” 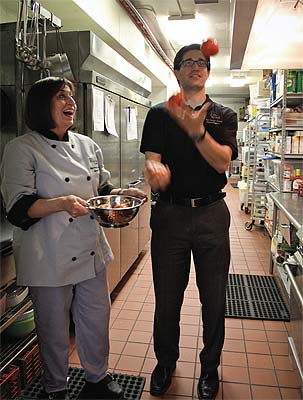 Story and Photo by Katie Ruppel

At the new Z’s Café, brownies rest on the counter, the kitchen shines with silver and a dainty cart sits in a corner.

“That’s what I had three and half years ago,” says owner Janet Z. Capua, pointing to the cart. “That’s how I started. We’d make sandwiches and I’d go to beauty salons, or wherever they’d let me, and sell things off that little cart.”

Today the café and catering company has two Fort Worth locations: one in the Fort Worth Community Arts Center and a new establishment on Pennsylvania Avenue in the Southside neighborhood.

After 40 years as a dental hygienist, Janet and her son Carlo Capua found themselves in a career change at the same time. Carlo asked his mother the question that most parents asked their graduating seniors when they finish high school: “If you could only do one thing for the rest of your life, what would it be?”

Cooking was nothing new to Janet. At age nine, she flipped her first breakfast of pancakes, as a mother she cooked nutritious dinners every night for her two children and as a friend she made meals for birthdays, showers, funerals and every event in between.

Determined to go from cart to commercial kitchen, Carlo and Janet searched the city for availability for their catering business. On a tour of the Samaritan House, a nonprofit that provides support for the homeless as well as those with HIV/AIDS and other special needs, Carlo snuck a peek of the kitchen and asked about using it in exchange for boxed lunches. The partnership between the two began there.

When Z’s Café & Catering found permanent space in the Fort Worth Community Arts Center, Carlo and Janet staffed it with Samaritan House residents. Many that they hired hadn’t worked in years or had never worked at all. Employment at the café provided a stepping stone for bettering themselves. Some are now enrolled at Tarrant County Community College, in GED classes and in literacy classes. With Janet cooking beside them, they have the opportunity to eat better, too, while gaining skills in the workplace.”It’s like raising kids,” Janet said. “When they do good I hug them all over, and when they do bad I kick them in the britches.”

Family is key at Z’s Café. Janet’s father John Zito, whom Z’s Café was named after, had encouraged her to cook since tasting her first plate of pancakes. After watching her father lose his battle to pancreatic cancer, Janet holds a special place in her heart for those struggling with cancer. In addition to running two cafes and the catering business, Janet and Carlo also distribute two meals daily to patients in the Cuisine for Healing program. “I give everything I can to those meals, because even if they can’t eat, it just brings them joy to have someone cooking for them,” Janet said.

Each meal – whether it be homemade lasagna at the café, chicken Parmesan at a catered event, or a quinoa-stuffed portabella mushroom for Cuisine for Healing – is made with fresh, healthy and affordable food.

“I cook like a mom would cook for her family,” Janet said. “I want to talk and laugh with you at the table, and I want you to stay well and be happy.”