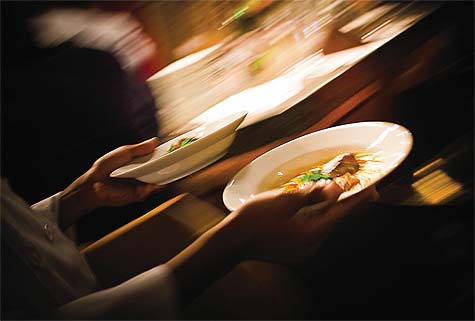 It’s an hour before dinner service and our Cafe Momentum team is in high gear.

With the blessing of Cane Rosso owner Jay Jerrier, we have taken over his Deep Ellum restaurant. Instead of the regular kitchen staff, there’s a special group of young men working alongside guest chef Brian Luscher. In the front of the house, another group of teens, Cafe Momentum’s waitstaff, is getting last minute descriptions of tonight’s four-course meal. Both the kitchen crew and the servers are culinary students. They are also juvenile detainees from the Dallas County Youth Village, a facility for nonviolent offenders between the ages of 13 and 17. The proceeds from this dinner will one day help build Café Momentum, a non-profit restaurant that will lend a helping hand to these young men and give them a second chance.

I am the chef and co-owner of the Dallas restaurant Parigi, and my business partner Chad Houser and I are leading the charge to give Café Momentum a permanent home. We want to build a place where these young men (and eventually young women) can practice and improve their skills and learn every aspect of what it takes to work in the restaurant industry. We want to help them become productive members of our city’s culinary community. The seed for this idea was planted two years ago when Chad and I drove to the Dallas County Youth Village to learn more about its new culinary arts program. We had met some of the Youth Village teens a few months earlier at the Mama Ida’s Ice Cream Social at the Dallas Farmers Market, and we were intrigued.

At the Youth Village, we were given a tour by young men who were confident and polite. They looked us in the eyes and said “yes, ma’am” and “no, sir.” We could see the pride they had in their program. In one garden, there was okra growing five feet tall and a beautiful watermelon the boys were nurturing in a side garden.

Chad and I drove back to Dallas jabbering the whole way about what we had just seen. We were hooked. We wanted to expand the program, build it into something more and mentor these guys. We wanted to help.

We took our ideas to Jerry Silhan, the Executive Director of Youth Village Resources of Dallas, whose enthusiasm, compassion and determination had nurtured the culinary arts program into existence. He harnessed the support of The North Texas Food Bank, Will Allen’s Growing Power and El Centro College’s Culinary Arts program. He recruited Charles Plummer, a former Wolfgang Puck chef, to teach culinary skills and to develop the Youth Village’s organic garden. Most recently, the program added a giant fish tank in one of its hoop houses to farm organic tilapia.

Together, Chad, Jerry and I began making plans for a full-service café. We needed to make sure we had the finances in place to create a sustainable restaurant. We decided on a series of pop-up dinners to raise money. We call them “pop-up” dinners because you never know where they will pop-up next.

As a rule, chefs are very community driven. We love to feed people. We love to make people feel welcome. We decided to ask our fellow Dallas chefs to get involved and every one we’ve asked has said yes. 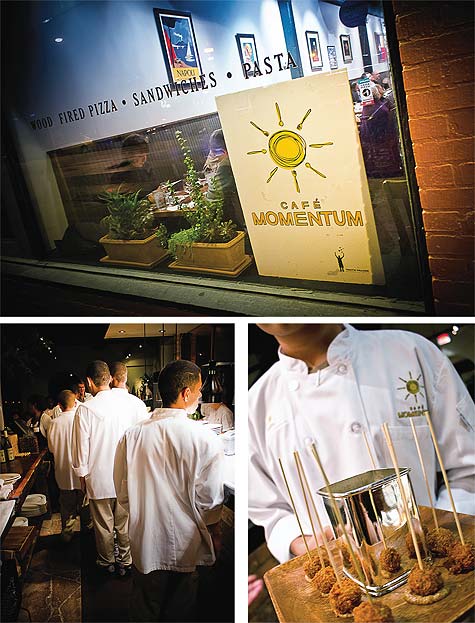 In June of 2011, the Café Momentum team launched its first dinner at the Milestone Culinary Arts Center with chef Jeffery Hobbs of Sissy’s Southern Kitchen and Bar doing the cooking. With only word of mouth, a Facebook page and some great free press, the event sold out within 24 hours.

There have been eight dinners so far, each held at a different venue with a different chef cooking. As of this spring, we’ve reached approximately one-third of our financial goal.

Community support has been overwhelming from both the diners who have come to share a meal, and from the many businesses and individuals who have donated their services. We have built an amazing team. The young men receive front-of-the house training from Phil Willis and Kenneth Pyron of Conference Hospitality Group at City Place the week before each event. Under their guidance, the students learn the proper steps of service, how to set a table, where the water glass goes.

On the afternoon of the dinner, the students arrive at the venue around 3:00. They have just returned from home visits, where they’ve spent time with their families. Because we want to build on that sense of belonging, we start with our own family meal. We sit together, meet the chef, go over the expectations of the evening, and discuss what will be served and who will work what station. After our meal is complete, our teams break into the front of the house (our servers) and back of the house (the kitchen crew), and under the guidance of their mentors the boys begin their tasks.

You can feel the enthusiasm and anticipation as they do their jobs. They are working, but they are having a good time doing it. They share stories while they work. We are all getting to know each other and building a spirit of cooperation, so crucial in a restaurant environment. The place becomes electric as we countdown to the moment the doors open.

Then, it’s show time. Guests begin arriving, and the first round of hors d’oeuvres are passed. The young men serve items they may have never heard of prior to this evening, but they do an impressive job telling their customers what they have on their trays. As apprentices, they are interacting and being received by people who don’t know them. They are being treated with respect. When the guests sit for dinner, the young men serve the food, course by course, refill the water glasses, then clear and wash the dishes.

As the diners take their last bites of dessert, the chef begins introducing each young man. The guests see the proud faces of these boys who are working hard to build a future. They see the power of what a community can accomplish. By supporting Café Momentum, the guests are helping change lives. This is the power of momentum, and at the end of the evening, all sides are ready to do it again. 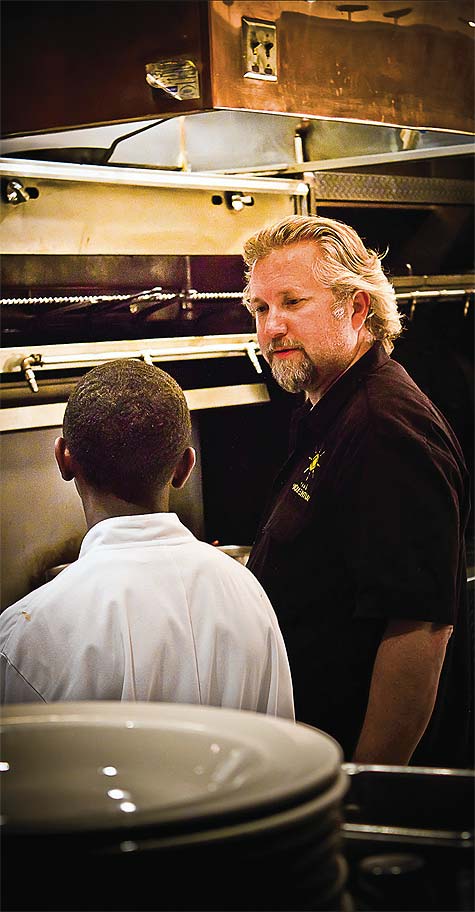