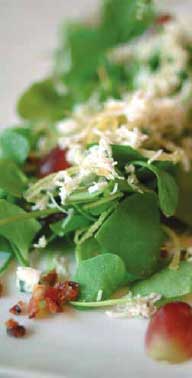 Serves 4 as a first course

Combine first 5 ingredients in a pot and bring to a boil.

Allow to cool slightly, and pour over grapes.

Let the grapes sit at least 3 hours before serving, overnight for best results.

Heat the oil in a skillet until it reaches 350 degrees. Dip leek rings in seasoned flour and lightly coat.
Shake excess flour off leeks. Place leeks in oil and fry until golden brown. Remove and strain on a paper towel. Reserve until ready to assemble salad.

Wash and spin-dry the lettuce. Toss salad with vinaigrette and divide onto four plates. Top salad with bacon, grapes and leeks. Grate frozen cheese over salad. Serve and enjoy.

CHAD HOUSER is a proud native of the great state of Texas and is a true connoisseur of all her fruits, whether it's locally-grown Lemley tomatoes, a refreshing Viognier from the Hill Country, or a mean plate of Dr. Pepper BBQ ribs straight from his home kitchen. Often referred to as the "King of Freshness" by his local foodie paparazzi, Chad, recently nominated by D Magazine as Best Up-N-Coming Chef, is a co-owner and chef of Parigi Restaurant. He is also President of the Board of Directors for the Dallas Farmers Market Friends, where he partners with local legends like "Mama" Ida Papert to promote anything and everything local. Chad is a Texan through and through -- big heart, big boots, and some serious spurs to match.