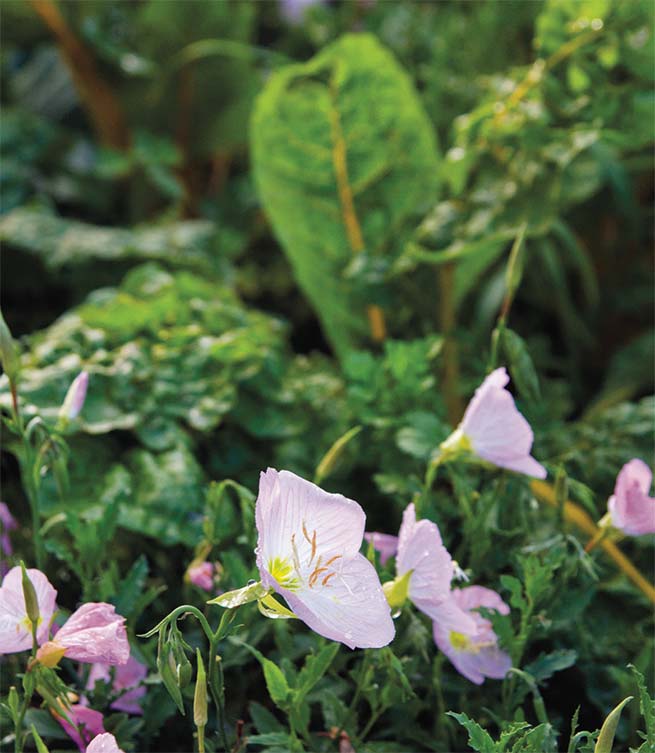 More than a century and a half ago, when Native Americans planted their crops each spring, they formed small mounds of soil and sowed seeds of corn, beans and squash into each. First the corn germinated, grew up tall and provided a trellis for the beans to vine up and around, which raised the bean plant off the ground and reinforced the corn stalk against high winds. Then, the squash vine sprawled out underneath, thriving in the light shade of the corn and producing a living mulch that both thwarted weeds and reduced moisture evaporation from the soil by shielding the ground from the sun’s heat. In addition to these advantages, says Native Seeds/SEARCH Education Coordinator Melissa Kruse-Peeples in Arizona, this agricultural technique known as the Three Sisters Method also gave these staple crops a benefit that wouldn’t be discovered until the 20th century: “Beans are nitrogen-fixers, meaning they host rhizobia on their roots that can take nitrogen, a much needed plant nutrient, from the air and convert it into forms that can be absorbed by plant roots.” Thus, the Three Sisters Method increases crop yields, makes better use of land and conserves resources. By understanding just a few concepts of this intercropping practice, gardeners anywhere can put it to use in growing a beautiful, productive garden that’s a haven for both people and pollinators.

“There are some definite no-nos,
such as onions next to strawberries.”
—Dr. Diana Jerkins

“Plants have relationships with other plants just like people have friends and enemies with other people,” explains Dr. Diana Jerkins, research director with the Organic Farming Research Foundation in Santa Cruz, Calif. “Intercropping can be regarded as a form of companion planting, which is a method of growing plants where plants with similar or different characteristics are grown next to each other and provide a specific purpose by being together.”

Jerkins says that plants that complement each other may either be planted side by side or in alternating rows to achieve the intercropping benefits. As a general rule of deciding what crops should be planted together, she says to consider each plant’s characteristics such as the height of the plant, its sunlight requirements, whether it has a spreading or deep root system, whether the plant produces flowers and fragrance, and the days to maturity for the crop.

“Another combination allows one crop to provide nutrients to other crops,” Jerkins says. “Legumes, such as beans, are nitrogen-fixing plants and can benefit other plants that don’t sequester nitrogen from the air through soil interactions.” Legumes such as beans and peas bolster nitrogen levels for nutrient-hungry potatoes, pumpkins, okra and other so-called heavy feeders.

To save space in the garden, crops that mature quickly may be placed next to transplants of crops that take longer to fill out. Lettuce seeds sown alongside cabbage transplants will be ready for harvest just as the cabbage begins to need more space. Radishes and tomatoes are a space-maximizing combination, too. Seed packets denote the information needed for making these pairings as either days to maturity or days to harvest.

“There are some definite no-nos, such as onions next to strawberries, unless you like onion-flavored strawberries,” Jerkins says. “It is best to look on a companion-planting chart to see what combinations are beneficial or harmful.” The Old Farmer’s Almanac hosts an online companion-plant chart for the top ten vegetables, which covers most of what home gardeners grow.

“Cover crops—plants grown next to the primary crop between rows or beds—can be considered companion crops,” Jerkins says. “These crops provide many benefits in suppressing weeds, keeping the soil cool in the summer, and when tilled into the soil will over time increase the soil biomass for improved soil health. Buckwheat is an example and also has beautiful flowers that will attract beneficial insects.” 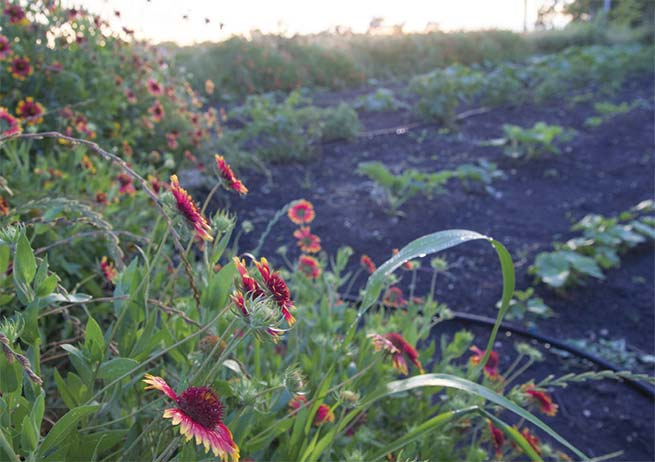 Perhaps the simplest method of intercropping is the companion planting of food crops with flowers—domesticated varieties and wildflowers. Flowers attract pollinators and give carnivorous spiders and predatory insects more places to hide out and stalk their plant-eating prey. Traditional row gardeners can alternate rows of peppers with zinnias, or tomatoes with marigolds. These combinations are long-lived and grow throughout the summer until the first frost in the fall. Raised-bed gardeners can build up gorgeous displays of tall tomato plants, pepper plants and eggplants at the center of the bed with short varieties of annual, easy-to-grow flowers around the border.

Beautiful varieties of tobacco, with their white or pink blooms that open at night and fill the air with fragrance, make for a good companion to tomatoes; the nighttime-pollinating sphinx moth prefers tobacco as a host for her eggs, thus saving tomatoes from the dreaded hornworm. Distracting insects from food crops with sacrificial companions is a variant of intercropping known as trap cropping.

And, as even crops that require full sun can use a little shelter from the intense Texas sunlight in the middle of summer, sunflowers may be interspersed throughout the garden for some welcome shade. They also help native Texas bumblebees and butterflies set up home in a garden. “I always recommend that gardeners consider planting seeds for flowers, like sunflowers, zinnias and marigolds, first,” Kruse-Peeples says. “Or, add established plants. This will help attract pollinators to your garden early and get them used to hanging around.”

At the end of the cooler spring season, letting parsley, lettuce, kale and broccoli enter their flowering stage, instead of pulling them up, will attract hoverflies to the garden, and hoverflies are almost as effective as ladybugs for ridding plants of aphids.

Unlike some gardening techniques that bring more subtle results, the benefits of intercropping may be evident in the first year, Jerkins says. “Plants grown together that have a beneficial relationship will immediately show these benefits by enhancing growth, keeping detrimental insects away or attracting beneficials, and keeping weeds down.

“As gardeners learn more about the combinations that are best for their climate and the crops they enjoy growing, the results will be enhanced by the increased biodiversity that is brought into the garden for food and beautification. If cover crops are used in the companion planting rotations, soil health and nutrient values will increase over time.” 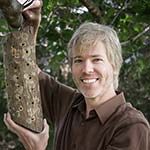 MARSHALL HINSLEY is a writer and photographer who lives with his wife on a 40-acre farm south of Dallas. With a passion for growing sweet, vine-ripe specialty melons, he's also a sustainable farmer whose mission is to grow food crops in a way that improves the ecosystem and benefits wildlife as well.